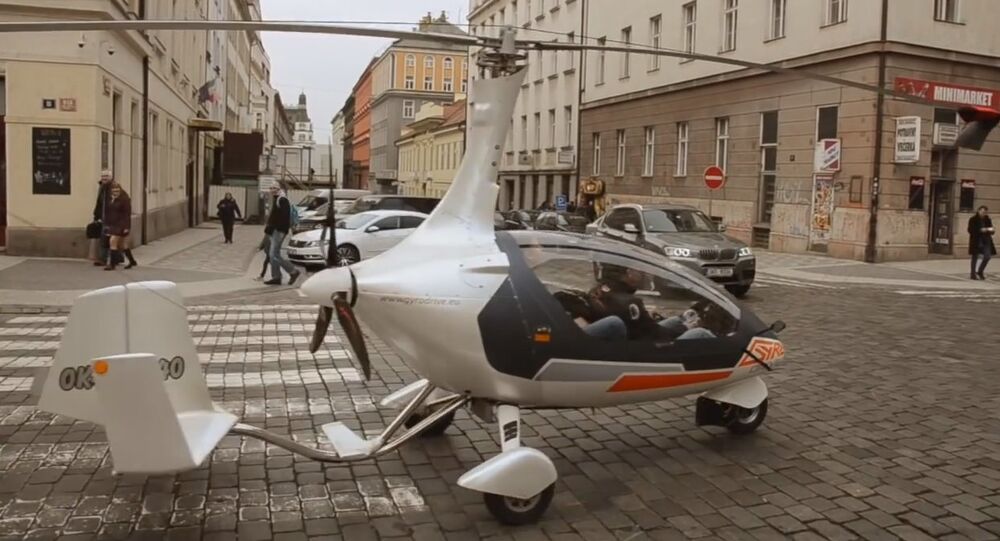 Czech pilot Pavel Březina assembled his own gyroplane, and as soon as the vehicle received permission to participate in road traffic, its creator piloted his flying car to Prague’s main square to have a cup of coffee.

© Photo : Youtube/Sputnik
They See Me Rolling…or Flying: First Flying Car Goes on Sale in Netherlands
The vehicle, which he proudly called Gyrodrive, is the first small rotor airplane that can officially drive on Czech roads, Pavel Březina wrote on his Facebook page. The autogyro, which uses kerosene and Natural 95 gasoline, is very compact, so it can easily fit into a regular garage.

Gyrodrive is equipped with a Rotax motor and can reach a maximum speed of about 180 km/h. It consumes about 15 liters of gasoline for every 100 km. However, when the gyroplane drives on roads, it uses another electric motor, which does not allow speeds higher than 40 km/h.

© AFP 2020 / Mark Ralston
Uber Picks Up Senior NASA Engineer to Develop Air Taxis
The flying car also meets other requirements for vehicles; for example, its lighting devices are properly positioned. It was essential when Gyrodrive was registered as a specific mechanical vehicle, which permits the pilot to travel from the aerodrome and back. To operate the machine, one needs to hold both a category B driving license and a pilot's license.

"I like to fly. Compared to driving a car, there are only minor complications, such as getting parked or refueled and stopping for a meal. The use of these machines in road traffic needs to be adjusted a little, and all these problems will be easily solved," Březina admitted.

"My dream was to fly to Prague and have a cup of coffee on Wenceslas Square, legally, in an aircraft, which is allowed both to fly and ride," the creator of the flying car said. And his wish came true! On March 14, Březina's journey started in a town of Přerov, where he flew to the airport in Letňany, and then he drove it on the road to the center of Prague.

On its way to the Czech capital's main square, the peculiar vehicle was stopped by police, who were initially confused. However, according to Březina, everything ended well, and he was able to make his way to Wenceslas Square for a coffee-break. Now he dreams of flying together with his family to London.

The flying car will be presented at an aircraft exhibition in Germany in early April.