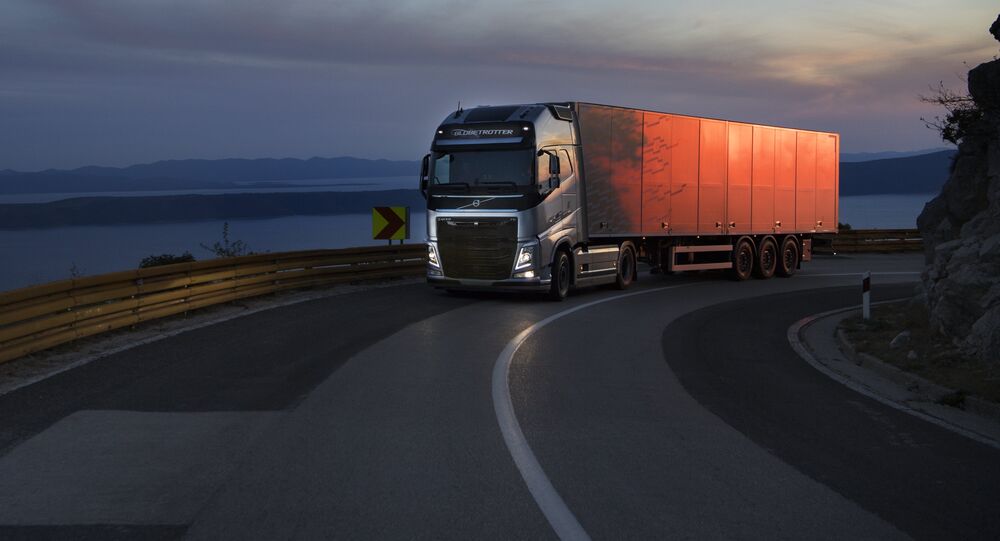 In some branches of technology, the future is already now. Sweden, whose roads already are the world's safest, is currently busy testing self-driving trucks that are claimed to be safer that those driven by human drivers.

© Photo : Youtube/ EASYMILE
Robots Behind the Wheel: Helsinki Debuts Driverless Buses
One of the projects involving driverless trucks will be run on Highway 40 between the cities of Gothenburg and Borås. According to project leader Sophia Jonsson, the project will kick off in April and is expected to last three years. The project is a result of a partnership between Borås City, automobile giant Volvo and the Chalmers University of Technology, local newspaper Borås Tidning reported.

The idea of self-driving cars is catching on across the globe and is being implemented in many countries, such as Switzerland and Finland, among others. What singles out Volvo's project from its peers, mostly involving mini-cars, is its idea of involving larger vehicles with an increased capacity and dimensions. Volvo's future technology dubbed HCT (which stands for High Capacity Transport) will involve vehicles up to 32 meters long and 80 tons heavy, which are expected to become completely driverless, Swedish national broadcaster SVT reported.

Although the vehicles will be assigned a driver to begin with, in the even that something should go wrong the ambition is to make the vehicles fend for themselves using GPS and sensors. After a three-year test period, the technology is expected to be introduced commercially.

© AFP 2020 / OLIVIER MORIN
A Kind of Magic: Brits to Test Volvo's New Self-Driving Car
Meanwhile, the futuristic project in Borås is far from being the only one of its kind. Autonomous vehicles are currently being tested by the same Volvo Trucks in a mine in Kristineberg and Scania on a test track outside Södertälje in Greater Stockholm. Volvo has been toying with the idea of self-driving trucks before. Last April, Volvo presented a research project involving autonomous vehicles, primarily intended for industrial traffic in mines, where security is easier to control.

Driverless vehicles are being touted as the next big thing, citing fuel economy, lower greenhouse emissions and road safety as the major selling points. With a rational and unworried computer behind the wheel, Sweden is hoping to further reduce the number of road accidents, despite already being the world leader in traffic safety.

The world´s first self-driving truck in an underground mine. Watch the video. #automation https://t.co/Xn8mqzoKPo pic.twitter.com/YMRkjR8PIL

​Sweden is renowned for its strict traffic rules and, as a consequence, the safety of its roads. Although the number of cars in use in the Nordic country has risen manifold since the 1970s, the number of road deaths has fallen by four-fifths over the same period. Following the introduction of the Vision Zero approach in 1997, seeking to eliminate road fatalities and injuries altogether, Sweden's roads became by far the world's safest, with only three of every 100,000 Swedes dying on the roads each year, compared with 5.5 per 100,000 across the European Union, and 11.4 in the US.