Buzz Aldrin has been to the moon and back, but the 87-year-old wants to see mankind on another planet in his lifetime. In an effort to raise public interest in a Mars mission, Aldrin has unveiled a new virtual reality Mars experience to simulate life 34 million miles from Earth.

"Cycling Pathways to Mars" is a helmetless 10-minute tour of Mars guided by a holographic Aldrin. It debuted at Austin's South by Southwest music and film festival. The simulation was created by virtual reality start-up 8i and was made available on platforms such as Oculus Rift and HTC Vive.

Aldrin claims that the purpose of the VR is to illustrate the realities of bringing human beings to Mars. "First, we have to understand the conditions under which we're going to use something," he said, referring to the infrastructure needed for a successful mission. "Then we design something and we can see how it works on the ground, and then we can put it in orbit." 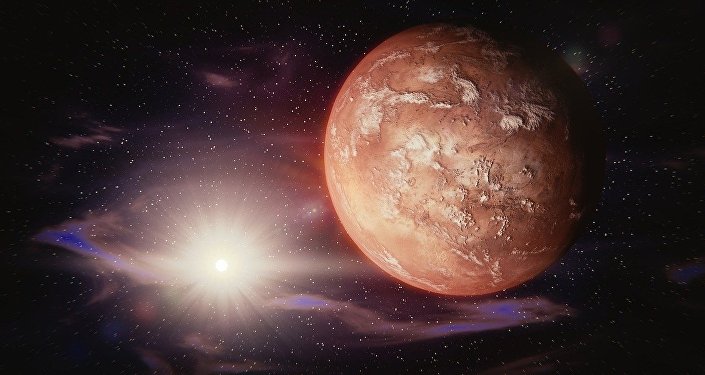 "We need to bring a lot of things together to make [Mars] a habitable place for a number of people," Aldrin said. "It would be nice to design something like that at the moon." After the moon, Aldrin says humanity should set up shop on Phobos, Mars' larger moon, and use it as a refueling station.

Aldrin is one of popular culture's most ardent champions of a Mars mission. From testifying to Congress about the necessity for such a mission to frequently donning his iconic "Get Your Ass to Mars" shirt, Aldrin has remained in the public eye even in his autumn years through his vigorous lobbying for humanity to become a multiplanetary species.

​In 2015, Aldrin presented a  plan for a Mars launch to occur on July 20, 2019 – 50 years to the day that the Apollo 11 mission that Aldrin undertook alongside Michael Collins and the late Neil Armstrong landed on the moon.

NASA's timescale, recently unveiled alongside their 2017 budget, is less ambitious. Over the next 16 years, NASA will prepare for the mission with the intention of placing a man on Mars in 2033.

Aldrin was most recently in the news for a visit to the White House to meet with US Vice President Mike Pence, who is also the head of the newly-revived White House Space Council. During his inauguration speech, President Donald Trump briefly mentioned space travel, making him the first president to do so since Ronald Reagan in 1984.

Fun to host a true American explorer, Buzz Aldrin, at the @WhiteHouse as we work to shape the space policy of our administration. pic.twitter.com/22tFtQknUp

​As for journeying to Mars himself? "I'm more valuable here than I ever think I could be there," Aldrin said. "I'm not an outdoorsman."

China Plans to Launch 1st Probe to Mars in Summer 2020