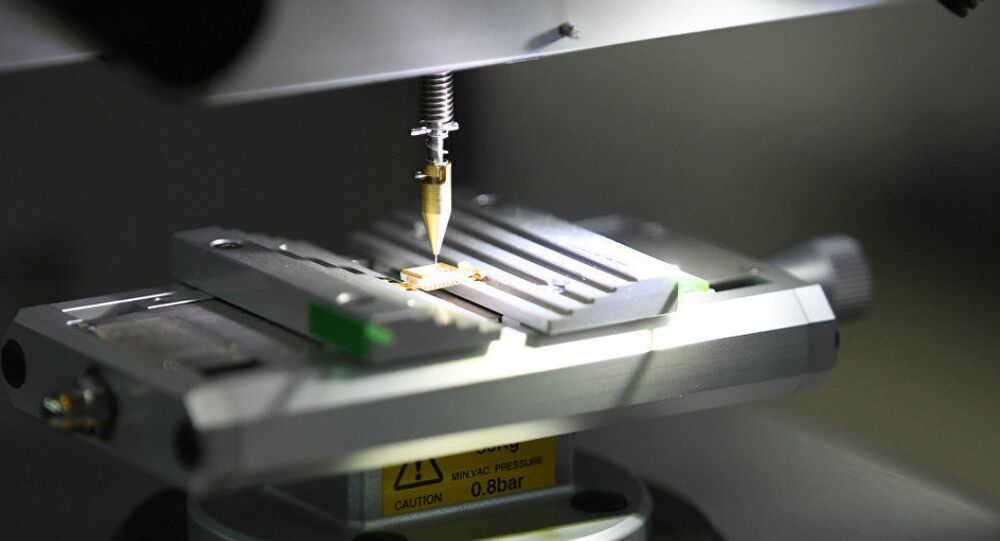 Engineers and scientists at the Zelengrad Nanotechnology Center, a Moscow-region technology incubator, have offered reporters a glimpse of the fruit of their labors. Inventions include a bandage/nanopowder combination able to stop bleeding instantly, a truly independent autopilot system for drones, a 10 minute DNA-based test for diseases, and more.

The Zelenograd Nanotechnology Center (ZNC), created by Rosnano in 2010, is tasked with developing products in the biotechnology, nanotechnology, and microelectronics sectors, and with creating new materials and green technologies.

Oksana Shaimardanova, the head of marketing at ZNC, told RIA Novosti that the tech incubator's main goal is to support startups and innovators who have an interesting idea and the plans for its realization, but lack the funds to do so.

© Sputnik / Dmitriy Vinogradov
Aerospace Jam: Russia's Su-34 Bomber to Be Able to Hide Entire Squadron From Enemy Radar
About 30 million rubles ($508,000 US) has been granted to some three dozen projects supported by the center. Some projects have already gone on to achieve commercial success, catering to both Russian and international clients.

According to RIA Novosti, the center has had a very promising crop of successes in the field of biomedicine. For example, with ZNC's assistance, a company called New Biomedical Solutions has come up with a special powder/bandage combination that uses nanoparticles to help to heal wounds almost instantaneously upon contact. The particles consist of chitosan, a saccharide polymer, the carapace of arthropods, protein supplements and other molecules.

Explaining how the product works, project manager Sergei Brusov said that the nanoparticles stop bleeding by absorbing water from the blood, causing it to clot faster, and by sharply increasing the concentration of fibrinogen fibers and other proteins involved in the formation of blood clots to speed up the natural healing of the wound. Moreover, chitosan particles themselves adhere well to the body's tissues, resulting in an artificial blood clot which can help save an injured person's life before he or she makes it to the hospital.

© Sputnik / Mikhail Voskresensky
Nanopowder dressing for the rapid closure of wounds, created in Zelenograd
© Sputnik / Alexey Druzginin/Anton Denisov/Russian Presidential Press Office
Past the Oilfields: Russian Industries Offer Investors Returns Beyond Energy
According to the company, the nanopowder/dressing combination is powerful enough to stop femoral artery bleeding in just two minutes. By the end of the year, New Biomedical Solutions expects to put its bandages on the commercial market, where they hope to get noticed by Russia's Emergencies Ministry, as well as various defense and security agencies like the police and the military. Brusov says that the half-meter long bandage will cost about 1,500 rubles ($25 US), while comparable products by Western companies average three times more.

Another company, NANOFIKS, has created a special coating consisting of porous silicon nanoparticles for use on clamps which hold skull bones together after brain surgery. According to startup founder Nikolai Diachkov, the coating accelerates bone growth and the restoration of skull tissue, and avoids the problems of rejection, inflammation or other issues that arise from the implantation of metal objects on bone. Testing of NANOFIKS's product will soon start at Moscow's Burdenko Neurosurgery Institute.

Another startup called Maksigen has developed a device for speedy and mobile DNA-based disease testing. According to creator Kirill Petrenko, an analysis using the tester takes only 10-12 minutes, and costs about 300 rubles ($5), thus avoiding the few days' waiting time common at most medical centers.

A key innovation of the system is its use of special disposable cartridges, which contain a set of chemicals to copy DNA information, along with special molecules designed to look out for various pathogens using genetic code, as well as a chip that determines the pathogens' presence. Cartridges are inserted into a special device which heats and cools the sample several times over to copy the DNA data, after which the device reports whether or not the sample contains a particular disease.

"If there is even one molecule of a virus or bacteria in the drop of blood, our system will multiply it and show its presence in the sample," Petrenko explained. "Our dream is to make this tool as easy and convenient to use as a modern blood glucose meter," he added.

© Photo : pixabay
China to Unveil World's First Civilian Sub Developed Jointly With Russia by 2018
The system is already capable of finding traces of tuberculosis, and Maksigen is testing cartridges capable of detecting traces of STDs and other diseases. According to Petrenko, in the future, these cartridges will be able to find dozens of diseases, including viral diseases such as HIV. Another benefit of the system is that the cartridges last about a year, meaning that they can be used in developing countries where there are no on-site DNA analysis centers.

Another interesting project supported by the ZNC is a new autopilot system for drones with its own independent guidance system – meaning it doesn't require a constant signal from navigation satellites.

Engineers from a company called MIRP-IS, which designed the autopilot, aren't new to the Russian hi-tech world; they are already well known for their work on Hyperbok – a toy robot with the ability to recognize its owner's voice, to learn independently and communicate with others.

The neural networks developed in the design of the toy, presently in development, have helped MIRP-IS develop the algorithms according to which a drone's onboard computer can literally 'see' obstacles, orient itself according to a map, and move autonomously, allowing it to carry out its preprogrammed route even if communication with the pilot or navigation satellite is lost.

Company official Pavel Skriptov explained that a combination of neural network and classical computer vision algorithms allows their autopilot system to work using even relatively weak processors –like those in mobile phones. The engineer stressed that the autonomous navigation system allows its drone vision system to work even in a built-up urban environment if two cameras – one looking forward and the other down, are installed.

According to Skriptov, the autopilot may be interesting to the military – given that combat UAVs often go astray or are even intercepted by the enemy in trivial ways – including jamming the navigation signal or breaking into the link. In the case of an autonomous system, however, enemy air defenses would need to emit powerful electromagnetic radiation, literally burning up the drone's chip, in order to bring it down.

© Photo : PIxabay
Inspector Gadget: CIA-Infected Smartphones 'Help Spy on Their Hosts'
"We have already received our first commercial customer – a company called Finko, which produces drones in Izhevsk," Skriptov said. "Furthermore, we are negotiating with other companies involved in the manufacturer of drones for using our algorithms and hardware developments for their airborne devices."

Other interesting projects presented to reporters by ZNC include a 'superbattery' for X-ray machines, an advanced 3D printer design from a startup called Picaso, which prints using two different types of plastic at once, and features other innovations, and an internet connection using the conventional power grid.

Past the Oilfields: Russian Industries Offer Investors Returns Beyond Energy