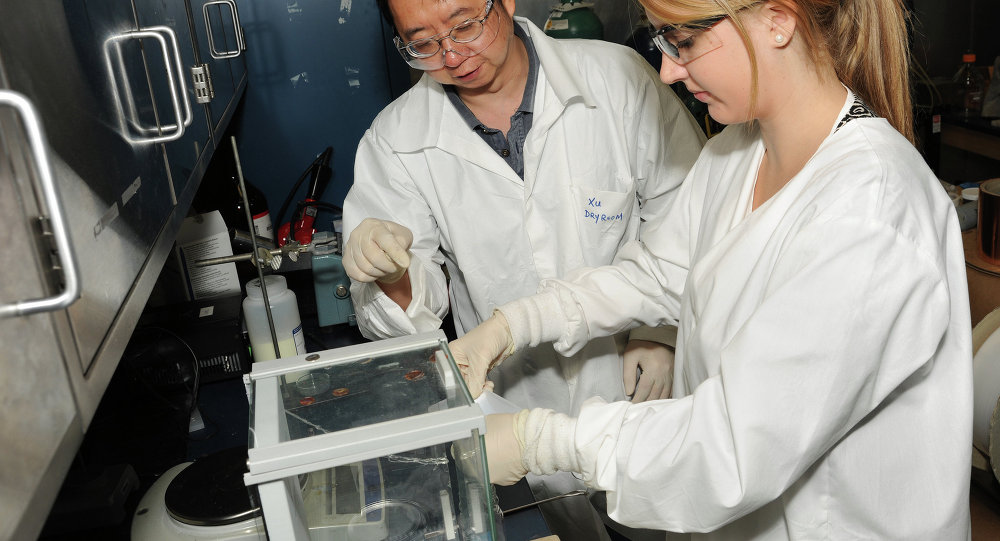 What did you do at work today? If you are a physicist, you might have invented a new state of matter. Working independently, teams at MIT and ETH Zurich simultaneously announced that they have both synthesized a supersolid, a state of matter previously thought to be hypothetical. Supersolids combine properties of solids with superfluids.

Superfluids do occur in nature. They are identical to ordinary fluids with one significant difference: they have zero viscosity, meaning they provide no resistance and move without losing kinetic energy. Stir a glass of water and it will eventually be still, but stir a glass of superfluidic helium-4 and it will spin forever, so long as nothing disturbs it. Superfluids were discovered in the 1930s and are essential to sensitive instruments like spectroscopes, gyroscopes, and cryocoolers.

So what is a supersolid? Like a solid, it has a rigid structure, but like a superfluid, it has zero viscosity and never loses kinetic energy. Once thought to be impossible, physicists believed that it was possible to create a supersolid by taking solid helium and agitating the motion of helium atoms within the crystal. The existence of such a substance was postulated in the 1970s, and, if realized, could be used in extremely powerful superconducting magnets and sensors, as well as energy transportation.

"It is counterintuitive to have a material which combines superfluidity and solidity," said team leader Professor Wolfgang Ketterle of MIT's Physics Department. "If your coffee was superfluid and you stirred it, it would continue to spin around forever."

Rice University physicist Kaden Hazzard described it to Gizmodo by asking them to picture an ordinary crystal in their hand, nothing particularly unusual about it. Then imagine a piece of it breaking off, but, instead of simply falling to the ground, the broken-off piece would pass straight through the crystal, with no resistance.

No one has been able to put the theory into practice, however, at least until now. To create a supersolid, the MIT team cooled sodium atoms to temperatures near absolute zero to create a superfluid called a Bose-Einstein condensate, or BEC. Ketterle was one of the discoverers of BECs, an achievement which won him the 2001 Nobel Prize in physics.

The scientists then took the BECs and placed them in a vacuum chamber before bombarding them with lasers. Half of the BEC was converted to a different quantum state by the lasers, and then additional beams were used to force a transferring of atoms between the two states.

This caused what is termed "spin-orbit coupling," a quantum phenomenon in which an atom's spin causes it to change its energy levels. These energy transfers allowed the MIT team to give the BEC a rigid structure, transforming it from a superfluid to a supersolid.

The ETH Zurich Team took a similar approach, but with one key difference. They trapped their BEC between two mirrors, with the laser beams bouncing off both mirrors and repeatedly hitting the BEC, causing a supersolid crystal to form.

Of course, synthesizing a supersolid under such conditions is a far cry from practical application. The supersolid only exists at near-absolute zero temperatures in ultrahigh-vacuum conditions. But Ketterle is still excited to have made a reality out of a nearly half-century-old theory.

"With our cold atoms, we are mapping out what is possible in nature," he said to Phys.org. "Now that we have experimentally proven that the theories predicting supersolids are correct, we hope to inspire further research, possibly with unanticipated results."

"What motivates us is that once it's possible, then people know the laws of nature allow us to realize such materials. We hope that 10 to 20 years down the road it influences materials designers to go further, and maybe create a supersolid that exists outside a vacuum chamber."

In a twist that harkens back to the golden age of physics, both teams published their findings in Nature on the same day. The simultaneous realization by two groups indicates how big the interest is in this new form of matter, according to Ketterle.