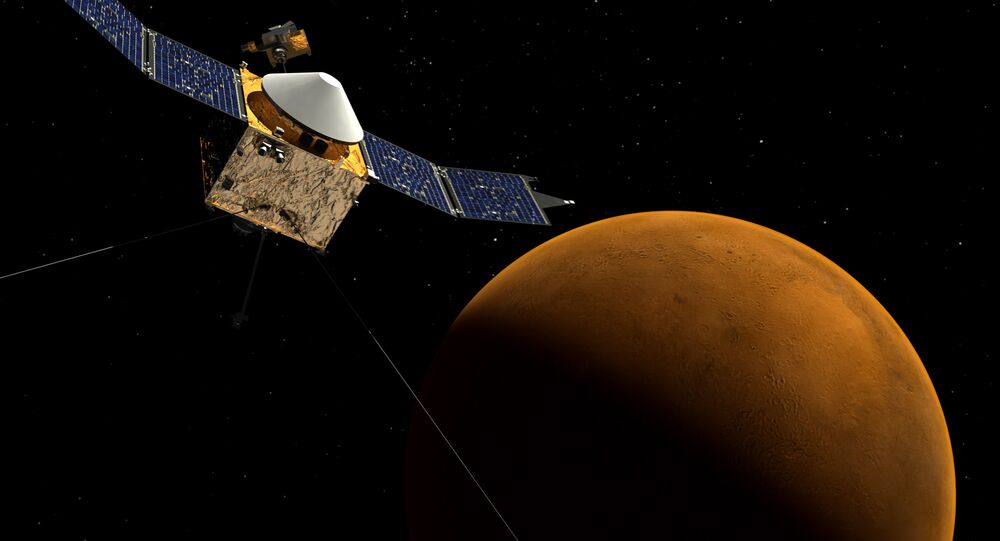 The Mars Atmosphere and Volatile Evolution (MAVEN) spacecraft of the US National Aeronautics and Space Administration (NASA) has performed a speed-boosting maneuver to avoid a collision with Mars' moon Phobos, NASA said in a statement.

© Photo : NASA/JPL/University of Arizona
NASA Releases Image Depicting the "Heart" of Mars
MOSCOW (Sputnik) – The maneuver was performed on Tuesday, when MAVEN used rocket motor burn to boost its velocity. Without this measure, the spacecraft, which orbits Mars, would have collided with Phobos one week later.

"This is the first collision avoidance maneuver that the MAVEN spacecraft has performed at Mars to steer clear of Phobos. The orbits of both MAVEN and Phobos are known well enough that this timing difference [2.5 minutes] ensures that they will not collide," NASA said on Thursday.

Currently, there are six objects in the orbit of Mars. Three of them belong to the US: Mars Odyssey (since 2001), MRO (since 2006) and MAVEN (Mars Atmosphere and Volatile EvolutioN, since 2014).

The MAVEN mission was launched in 2013 with the purpose of studying the Martian atmosphere. MAVEN reached Mars and started orbiting the planet in 2014.

Going Down: NASA Warns That California is Sinking Into the Ground