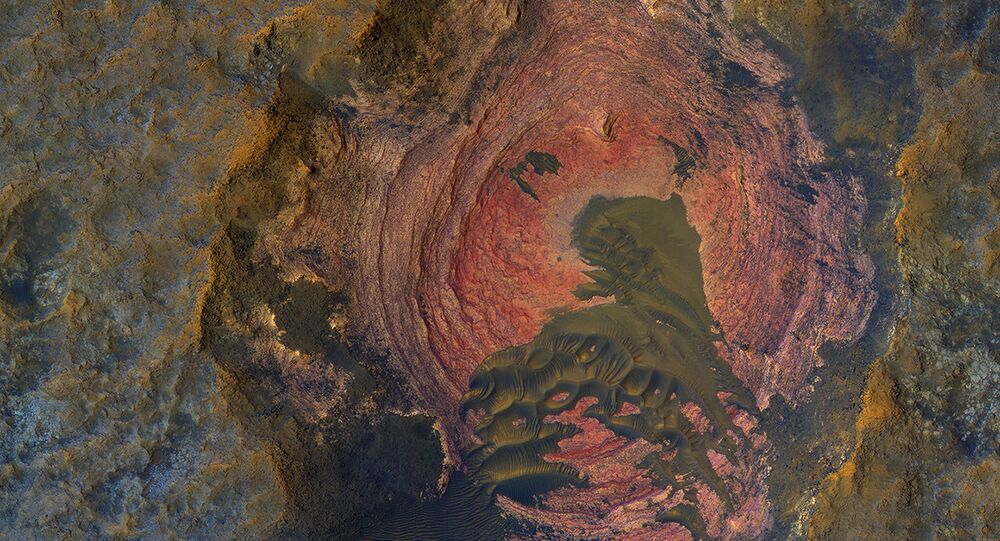 NASA has published a picture of the Martian surface, depicting the bedrock of the planet.

In their caption to the picture, researchers noted that the Red planet is mainly covered with fine-grained rocks, which normally conceal the bedrock.

The picture, however, captured the bedrock exposed and only partially covered with sand dunes.

The image was taken with the High Resolution Imaging Science Experiment (HiRISE) camera, which is installed on board the Mars Reconnaissance Orbiter spacecraft. The spacecraft is located at an altitude of about 300 kilometers above the Martian surface.

On their official Twitter account, HiRISE scientists wrote they managed to capture the "tell-tale heart" of the planet.

NEW: Colorful Bedrock Layers. Or, as we like to call it, “Mars’ Tell-tale Heart” – https://t.co/dPOSNJNiRY pic.twitter.com/NZjpMHuQus

© Flickr / NASA Orion Spacecraft
NASA Considering Adding Crew to Maiden Flight of New Megarocket
In January, NASA released an image of the Earth and Moon as seen from Mars' orbit.

Currently, there are six objects in the orbit of Mars. Three of them belong to the US: Mars Odyssey (since 2001), MRO (since 2006) and MAVEN (Mars Atmosphere and Volatile EvolutioN, since 2014).

There are also two European satellites: Mars Express and Trace Gas Orbiter (with Russian participation) as well as one Indian station called Mangalyaan.