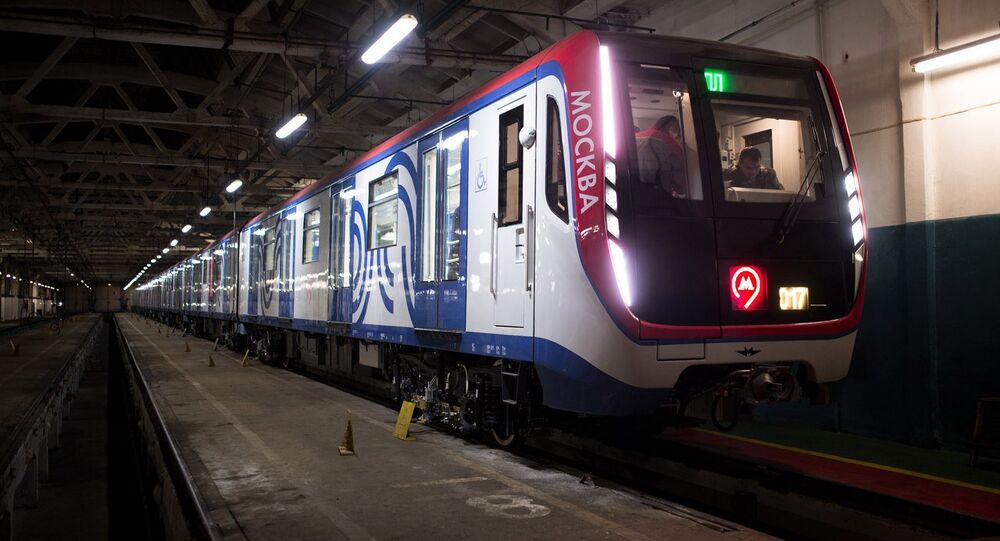 This spring, Moscow's Metro will receive a completely new train design – the 765 series 'Moskva', developed and built by the Metrowagonmash engineering plant.

Development of the train, which is currently undergoing daytime and evening testing, sans passengers, began in the early 2010s, when the management of Moscow Metro set designers with the task of creating a brand new generation of metro trains that could compete with the best foreign analogues.

Among the improvements demanded by Moscow Metro was the requirement that passengers be able to move from car to car all through the train, the installation of folding seats to increase passenger capacity during peak hours, a larger doorway for faster boarding and de-boarding, and the installation of digital systems to provide passengers with important information – including touch sensor monitors and interactive maps.

© Photo : Moscow Metro/vk.com
The Moskva's control panel
© Sputnik / Eugene Odinokov
Underground Secrets: Top Four Surprising Facts About Moscow Metro
Metrowagonmash's answer, the Moskva, took these requirements into account, and is also equipped with additional handrails, and features special areas for wheelchairs. Of course, making the train competitive with the best foreign models also required required it to have a smooth and quiet ride. The new train has a maximum speed of 90 km/h.

A competition was held from 2013-2014 between several leading Russian and international engineering firms, involving Metrowagonmash, but also Siemens, Sinara Group, Bombardier, Skoda, Alstom and Hundai, many of the latter partnering with other Russian firms. In late 2014, Metrowagonmash was announced the winner of the design competition, and awarded the contract to produce 768 train cars (96 trains) of the new generation of subway trains by 2020.

© Photo : Moscow Metro/vk.com
Sneak peak at the interior of the Moskva.

90% of the train's components are produced by Russian manufacturers, giving it a significant cost savings advantage compared to the foreign offerings.

The name 'Moskva' (Moscow) was chosen with the help of Moscow residents, who voted on the Aktivniy Grazhdanin (Active Citizen) web portal, and chose the name last July.

The first of the new trains, currently undergoing tests, is expected to step into service on the Tagansko-Krasnopresnenskaya Line, one of the metro's busiest lines, this spring. The train is estimated to be 15% more capacious than its predecessors, and can carry over two thousand passengers.

The Moskva made its first trial run in the metro starting on February 1, and tests are continuing. They are expected to wrap up next month, after which time the train will begin regular passenger service.

Metro 2017: All On Board Moscow's New Year Train

How It All Began: Rare Footage Depicts Construction of Moscow Metro in 1931

To Ride or Not to Ride? 'Shakespearean Passions Train' Comes to Moscow