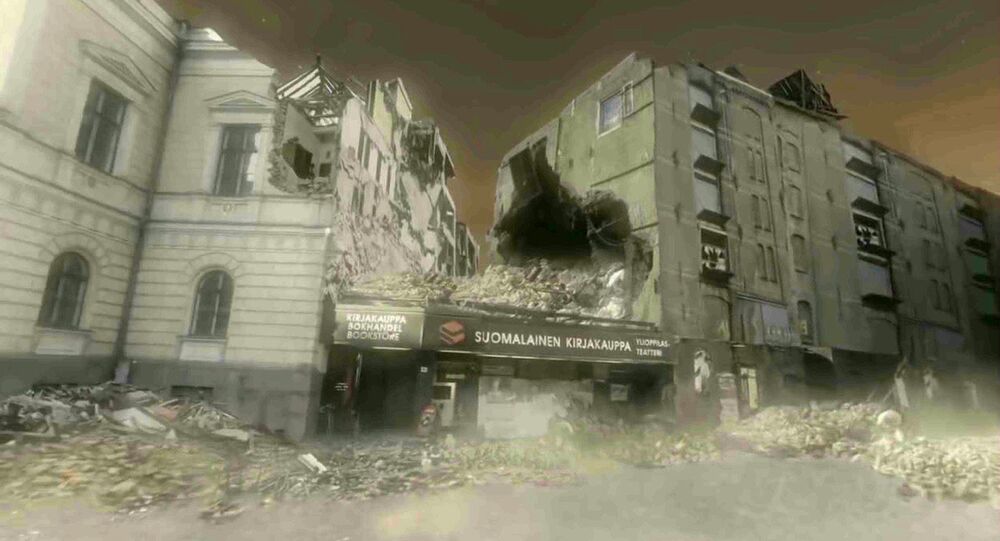 Finland is a peaceful nation that has steered clear of war for decades. To familiarize fellow Finns with the horrors of war, the Finnish national broadcaster Yle created a virtual reality video in which the atrocities of the Syrian war were moved to Helsinki's city center, a place familiar to all Finns and many tourists.

© Photo : Youtube / Naturskyddsföreningen
High-on-Life Swedes Taunt Gadget Obsession With 'Natural Reality' Glasses
A VR video by Finnish national broadcaster Yle, made in collaboration with the Teatime Research group, offers a glimpse of what the Finnish capital would look like if it was ravaged by war. The video offers alternate views of Helsinki's most recognizable sights, such as the Three Smiths statue, which are shown distorted beyond recognition by virtual bombings. In the video, viewers may see and experience Helsinki's city center destroyed by terrorists in the same way as Aleppo, Syria.

"We wanted to bring viewers a sense how it feels when your hometown and everything that you cherish there gets destroyed. Like those people who are forced to leave their own country as refugees," Yle editor and anchor Peter Westerholm relayed.

"That's as close to hell on earth as you may imagine," Finnish rapper Karri 'Paleface' Miettinen told Yle after the experience.

The video "Aleppo-Helsinki" is the first known experiment of this kind in Finland and arguably the first case where virtual reality has been used in journalism. Teatime Research CSO Aleksis Karme said that in the project his team wanted to take the experience a step further, calling it "immersive journalism."

"Virtual reality opens new opportunities for storytelling. There, you will experience the situations themselves, instead of just reading about or looking at them. There is a huge potential here in terms of the future," Peter Westerholm pointed out.

© AFP 2020 / PATRIK STOLLARZ
Swedish VR Method Helps Relieve Real Phantom Limb Pain
According to the creators, Virtual Reality offers new prospects for the media, both inside Finland and on the global market. Of late, a number of virtual content-focused companies have been established in Finland.

"At the moment, virtual worlds are mostly utilized in games and various industries," Aleksis Karme said.

The VR technology is expected to bring benefits to sectors such as science, where it could be used for teaching and visualization. According to Karme, there is also a clear potential for VR technology in remote management applications in the shipping business.