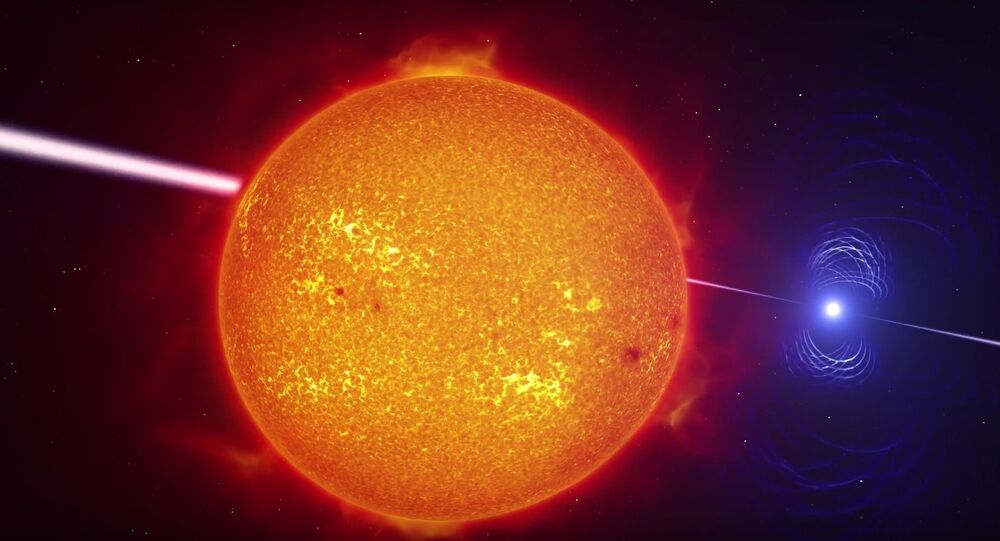 English and South African astronomers working together have confirmed the existence of a white dwarf pulsar, the first star of its kind to be identified. Astrophysicists have been combing the visible universe for stars of this type for 50 years.

Professors Tom Marsh and Boris Gänsicke of the University of Warwick's Astrophysics Group, and Dr. David Buckley, from the South African Astronomical Observatory, have confirmed a hypothesis proposed by amateur astronomers in 2016.

AR Scorpii (AR Sco) is a scant 380 light years from Earth, in the Scorpius constellation. In July 2016, amateur astronomers observing the system noticed unusual behavior from AR Sco, which at the time was believed to be a one-star system.

Their observations caught the attention of professional astronomers, including Marsh. "AR Scorpii was discovered over 40 years ago, but its true nature was not suspected until we started observing it in June 2015," he said at the time. "We realized we were seeing something extraordinary the more we progressed with our observations."

The University of Warwick team has confirmed that AR Sco is a binary-star system, consisting of a standard red dwarf and a white dwarf. They have also concluded that the white dwarf is a pulsar, explaining the strange behavior from the system.

"The new data show that AR Sco's light is highly polarized, showing that the magnetic field controls the emission of the entire system, and a dead ringer for similar behavior seen from the more traditional neutron star pulsars," Marsh said.

A pulsar is a star with an extremely high density and a strong magnetic pull. Every pulsar discovered so far is a neutron star, the collapsed core left behind by the supernova of a massive star. Neutron stars are very hot, and typically very bright, which makes them comparatively easy to locate.

White dwarfs are also the collapsed cores of supernovae, but are the remains of much smaller stars. Although white dwarfs are far more common than pulsars, they are harder to find because they emit much less heat and light, after radiating away most of their energy. The first neutron pulsars were discovered in 1967, and, ever since, astronomers have been on the hunt for white dwarf pulsars.

The AR Sco white dwarf has an electromagnetic field 100-million times that of Earth, despite being a similar size to our planet. Every two minutes, it completes a rotation around the larger red dwarf, releasing tremendous amounts of energy in a 'beam' of electrons moving at nearly the speed of light, the source of the system's unusual behavior noted by the amatuer astronomers.

© AP Photo / NASA/file
One of a Kind: Hubble Telescope Captures the Death of a Star (PHOTO)

"AR Sco is like a gigantic dynamo: a magnet, the size of the Earth, with a field that is about 10,000 times stronger than any field we can produce in a laboratory, and it is rotating every two minutes," Gänsicke said. "This generates an enormous electric current in the companion star, which then produces the variations in the light we detect."

"We've known pulsing neutron stars for nearly fifty years, and some theories predicted white dwarfs could show similar behavior," said Gänsicke in August 2016. "It's very exciting that we have discovered such a system, and it has been a fantastic example of amateur astronomers and academics working together."