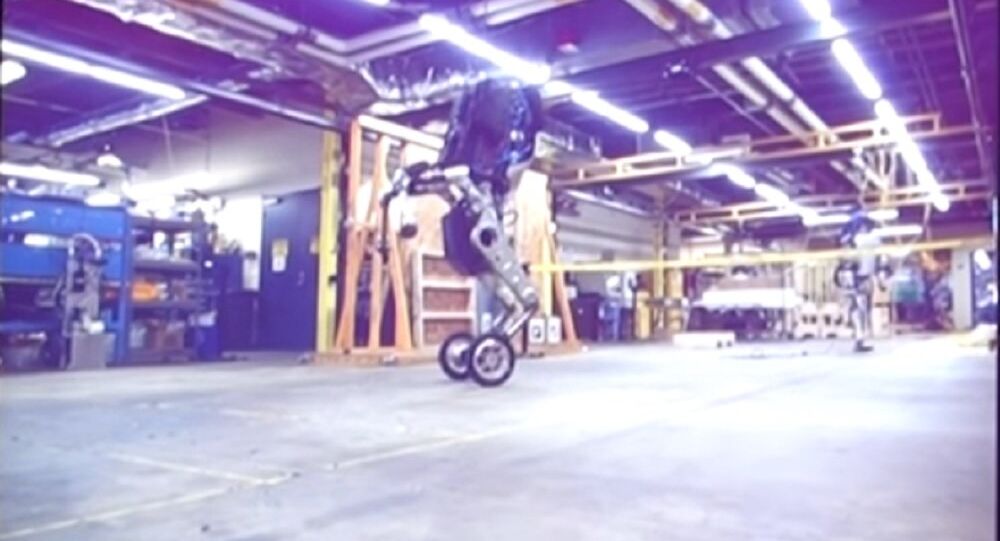 'This is the debut presentation of what I think will be a nightmare-inducing robot,' joked Marc Raibert, founder of robotics company Boston Dynamics, of his company’s new robot prototype. The new machine, which moves around on wheels instead of legs, is capable of high-speed movement and smooth navigation of obstacles.

Handle, as the device is named (as they intend for it to eventually be able to "handle objects"), looks similar to the humanoid ATLAS android, with its feet replaced by a pair of wheels. "This is an experiment in combining wheels with legs, with a very dynamic system that is balancing itself all the time and has a lot of knowledge of how to throw its weight around," said Raibert during a presentation to investors.

Handle can shift its weight to keep itself stable, even when it leaves the ground to jump over a barricade. Footage of its movements were uploaded to Youtube on Wednesday, and quickly went viral.

Raibert added that it is more efficient than a humanoid robot, although its wheels are less well-suited to navigating bumpy terrain than ATLAS's feet.

Boston Dynamics products, such as ATLAS, the load-carrying BigDog and the nimble Cheetah, which can run at 29 mph, have consistently wowed the public, although none have proven commercially viable.

The Defense Advanced Research Projects Agency (DARPA) funded BigDog in the hopes of creating a robotic pack mule for American soldiers, but the project was discontinued in 2015 after it was found that the robot made far too much noise to be viable in combat situations.

This caused Alphabet Inc, Google's parent corporation and the owner of Boston Dynamics since 2013, to put the robotics company up for sale. Alphabet mentioned that the company could no longer afford to "spend 30-plus percent of our resources on things that take ten years."

Interested buyers include Toyota and Amazon. Perhaps the Handle demonstration will contribute to fetching a better price for the beleaguered robotics firm.

Sawing Orangutan Competes With a Robot