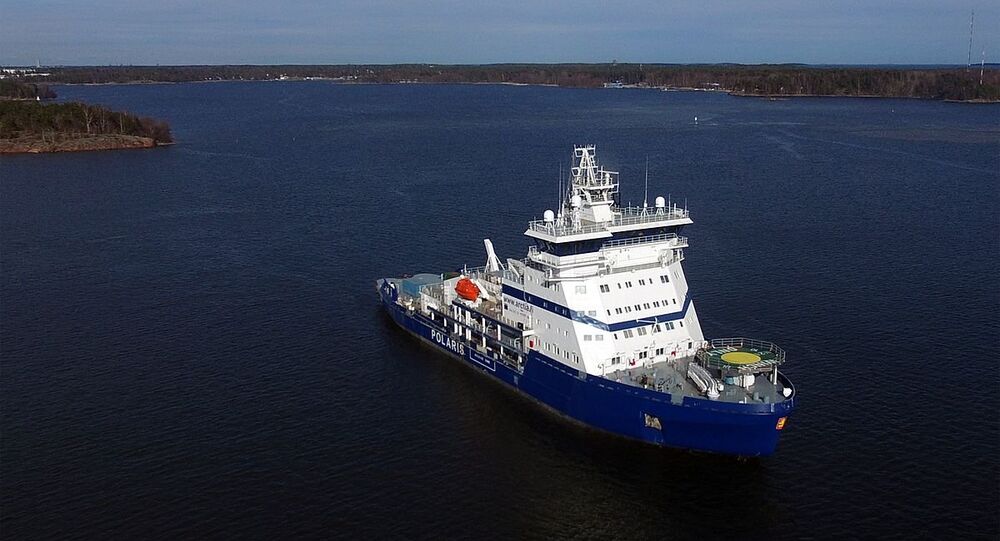 The world's first gas-powered icebreaker, built in a Russian-owned shipyard, has set off for duty in the Finnish part of the Gulf of Bothnia, which is the northernmost part of the Baltic Sea.

© Sputnik / Sergey Kompanichenko
Finland to Become First Country to Launch Unmanned Transport to Russia
The Polaris, the first ever icebreaker to run on liquefied natural gas (LNG) and ultra-low-sulfur diesel fuel, has been hailed as the world's most environmentally friendly vessel of its class. The dual fuel ability decreases its emission of carbon dioxide and other pollutants. According to the shipping company Arctia, Polaris is also the most powerful icebreaker in its league, Finnish national broadcaster Yle reported.

The Polaris is 110 meters long and 24 meters wide. The vessel, which has been tailor-made for the demanding conditions of the Baltic, is expected to be used for 50 years.

There is a new kid in town #polaris #jäänmurtaja #arctia pic.twitter.com/sVbNawMrGA

Arctia, owned by the Finnish state, is responsible for ensuring winter navigation to and from Finland's ports, all of which run the risk of freezing and becoming inaccessible during particularly cold winters. Arctia plans to completely update its icebreaker fleet by 2029, which is estimated to cost about €1bln.

© Photo : Pixabay
Finns to Ride E-Cars and Bikes to Help Gov't Achieve Carbon Neutrality
Built by the Russian-owned Arctech Helsinki Shipyard, located in the Finnish capital, the Polaris is the eighth icebreaker in the Arctia fleet and the first newcomer since 1998. Arctech Helsinki Shipyard currently has 550 employees and is in the process of building six ice-breakers. All of them, apart from Polaris, are going to Russia. Five years ago, Archtech decided to specialize in Arctic shipbuilding.

In the summer of 2016, the prolongation of Archtech's land-use lease by the City of Helsinki triggered concern due to the fact that the company has been on the US sanctions list since Crimea's re-unification of Russia. According to Helsinki City Board member Hannu Oskala, Finland need not take US sanctions into account, since the shipyard "concentrates on what it does best: civilian vessels."

​To celebrate the 100-year-jubilee of Finland's independence, the Polaris was adorned with centennial decorations. Finland's first icebreaker, the Murtaja, predates Finnish independence and began its operations back in 1890, when the Grand Duchy of Finland was still part of the Russian Empire.

Meet the Vladivostok, the World's Most Powerful Non-Nuclear Icebreaker