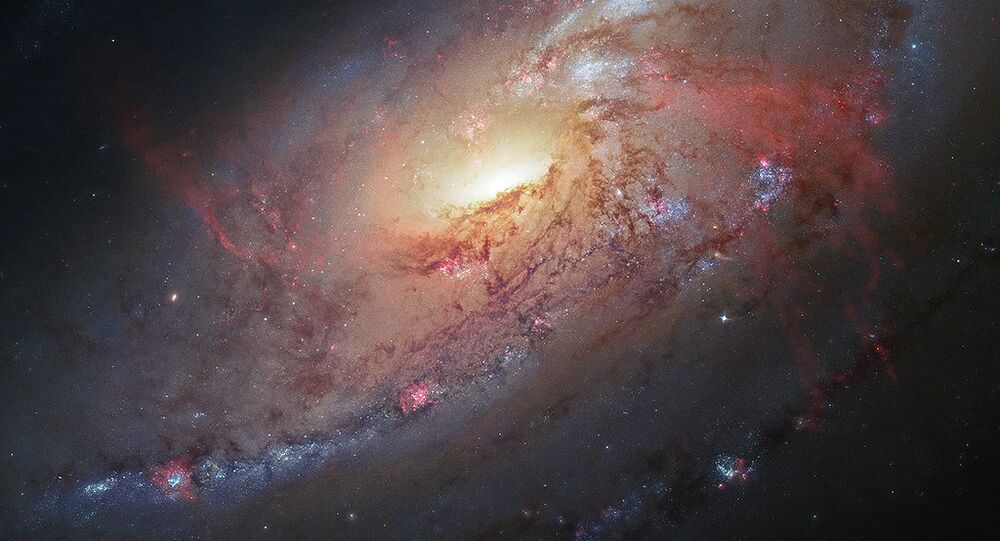 Astronomers announced that they have located the galaxy that a series of mysterious deep space radio signals, known as Fast Radio Bursts (FRBs), are originating from.

The dwarf galaxy, some 3 billion light years from Earth and less than 1/100 the size of the Milky Way, was detected by the Karl G. Jansky Very Large Array, a series of 27 radio telescopes in New Mexico. Astronomers were surprised to see that the FRBs were from a dwarf galaxy, as prevailing theories suggest FRBs are likely to be sent by a much larger galaxy.

FRB 121102, a unique cosmological event, appears to be repeating itself from the dwarf galaxy. "These radio flashes must have enormous amounts of energy to be visible from that distance," said Dr. Shami Chatterjee, an astronomer at Cornell University. "It was like trying to find a needle in a terabyte haystack. It took a lot of algorithmic work to find it."

There are multiple theories as to what causes the tremendous release of energy in an FRB, including star collisions, supermassive black holes, or the post-supernova formation of a magnetar — a neutron star with an extremely powerful magnetic field. But while those explanations may fit an ordinary FRB, FRB 121102 is repeating, and that brings a new wrinkle into the equation. In addition, FRBs are more likely to occur in large galaxies, not a dwarf galaxy like that of FRB 121102.

Astronomers call the discovery of FRB 121102's origin a major step toward understanding the nature of the intriguing celestial event. Heino Falcke, a radio astronomer with Radboud University Nijmegen in the Netherlands, said that identifying the source of the repeating FRB is like "[knowing] the home address" of the phenomenon, when before we only knew what "country" it was coming from.

FRBs were first discovered in 2007, and 18 have so far been positively identified. While they last only a millisecond, a single FRB radiates more energy than that of our Sun over a 10,000-year span. An FRB is of such cataclysmic power that Earth-bound instruments can detect them from billions of light years away.

"Why is this spectacular FRB in such a little, very innocent looking galaxy?" posed Falcke. "There are many things coming together which don't make much sense yet… even without a clear answer, the finding is a real game-changer."