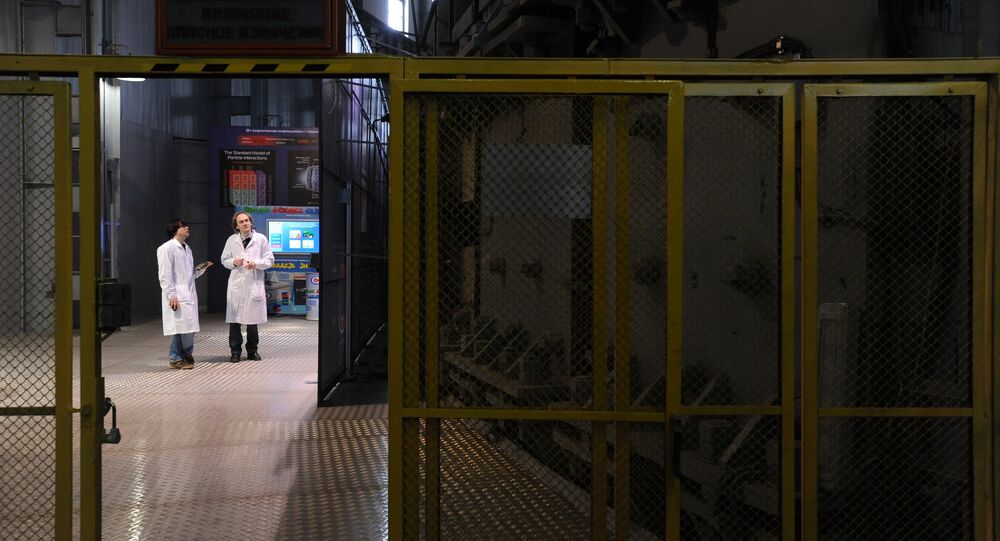 Physicists engaged in the construction of a nuclotron-based ion collider (NICA) facility in Dubna, outside Moscow plan to combine efforts to create of a unique electron positron collider at Novosibirsk's Budker Institute of Nuclear Physics. Promoters say the project would allow Russia to take the lead in a very promising niche of particle physics.

The Institute plans to create the Super Tau Charm Factory, a particle accelerator which would study the collision of beams of electrons (matter) and positrons (antimatter) in an effort to help to identify phenomena and processes beyond the Standard Model of particle physics.

© Sputnik / Alexandr Kryazhev
Siberian Physicists Ready for Next Step Toward Free Nuclear Energy
Commenting on the progress that has been made in the construction of the nuclotron-based ion collider project at Dubna, Levichev noted that this was the first of six government-approved mega-science projects to receive funding. "This gives rise to hopes that our project too will be implemented," he said.

The physicist explained that during their work on the Dubna project, he and his fellow scientists have discussed the prospects of uniting the efforts of all of Russia's physics institutes to help implement these kinds of projects. "I hope that by uniting, we will have a greater capability to push projects through," Levichev noted.

Physicists at the Budker Institute of Nuclear Physics are working on the so-called Super Tau Charm Factory, a particle accelerator and collider that would study the collision of beams of electrons and positrons in the hopes of identifying and classifying phenomena and processes which are beyond the Standard Model of particle physics.

So far, Levichev explained, the government has not allocated funding for the project, whose hefty price tag is estimated at roughly 27 billion rubles (about $446 million US). Still, that hasn't halted development work. Physicists are using all possible means of financing, including a grant from the Russian Scientific Foundation, in order to lay the groundwork for the collider's eventual construction.

© Photo : National University of Science and Technology MISiS/Maria Brodskaya
Behind the Scenes of Russian Science: How Innovations Are Born
13
"In 2016, we focused on work related to the injector component. This is a complex of installations and accelerators producing electrons (matter) and positrons (antimatter), which will collide in the collider," the physicist noted.

For his part, Budker Institute of Nuclear Physics director Pavel Logachev told RIA Novosti that his Siberian institute has been very actively involved in the Dubna project, adding that he hopes physicists from Dubna and other Russian regions will be just as active in work on the Siberian collider.

"We're not talking about a formal merger," Logachev stressed. Instead, he noted, work on the Dubna project will hopefully show that physicists, engineers and designers from across the country can work together in an effective, efficient manner. That "will be a serious basis for the government to continue work in this direction," he added, referring to the need for additional funding.

© Wikipedia / Eto shorcy
Russia May Start Particle Accelerator Cancer Treatments by 2020
The Super Tau Charm Factory is designed with a view of producing record numbers of tauon and charm quark exotic particles, hence its exotic-sounding name. The collider would allow scientists to conduct advanced research into a wide range of applications in modern high-energy physics.

At present and for the foreseeable future, there is no other collider facility anywhere in the world with the capacity to conduct the kinds of research that the Super Tau Charm Factory would be capable of. The facility would allow for the discovery of fundamentally new information about the structure of elementary particles. According to RIA Novosti, this would allow Russia to take the lead in this very promising niche on the cutting edge of world science.

Behind the Scenes of Russian Science: How Innovations Are Born