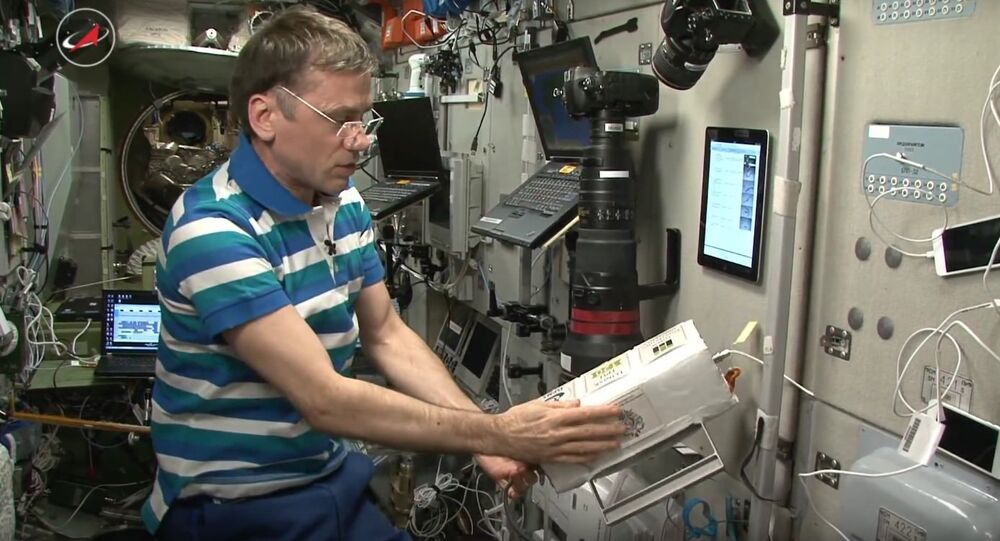 A unique 3D-printed Russian satellite is expected to be put into orbit from the International Space Station next year.

© NASA
5 Things Grown in Space Aboard the ISS
Scientists from Tomsk Polytechnic University in Siberia have managed to create a small, fully-functional satellite using a 3D printer.
Earlier this year, the Tomsk-TPU-120 satellite was delivered to the International Space Station (ISS); there, it is due to be placed into orbit in 2017.

In an exclusive interview with Sputnik Brazil, Alexey Yakovlev, head of the Tomsk Polytechnic University's Institute of High Technologies, touted the Tomsk-TPU-120 as the world's first satellite developed with the help of a 3D printer.

"The Tomsk-TPU-120 is the first such project in the world, in which the entire casing of a satellite is fully 3D printed using dynamic modeling. The combination of these technologies can significantly reduce the development time and the number of full-scale tests, find new engineering solutions and reduce the project's cost," Yakovlev said.

He explained that dynamic modeling, along with 3D printing, allow developers to reduce the satellite's weight, give it strong characteristics and resist vibration.

"The current project is just the first stage of a long-term project to develop and create small, multi-purpose satellites. In particular, this work pertains to the creation of an on-orbit group of satellites dealing with many urgent problems related to agriculture, forest fires, climate change and natural resources," he said.

Yakovled said that the Tomsk-TPU-120 satellite will be put into orbit in July 201, a process that he said would be implemented during the ISS crew's spacewalk.

According to him, it will be Russian cosmonauts who will launch the satellite from the outer surface of the ISS, something that Yakovlev described as "a tricky and expensive procedure, preceded by repair or the modernization of the space outpost."

"Experiments with the satellite were conducted not only on board the ISS, but also on the ground. Many radio amateurs from all across the world were able to catch a satellite signal on their radio stations, and posted videos of it on the Internet," he said.

Yakovlev added that after being put into orbit, the Tomsk-TPU-120 will be in free flight mode for about six months.

© Flickr / davejdoe
Russian Scientists Working Out 3D Printer to Construct Objects on Moon
During this time, he said, its orbit will ebb gradually and it is slated to eventually enter the dense layers of the atmosphere, where it will be destroyed.

He also said that in November 2016, the Russian Federal Space Agency Roscomos approved experiments on creating CubeSat satellites on board the ISS with the help of a 3D printer and then placing them into orbit.

A CubeSat is a type of miniaturized satellite for space research that has a mass of no more than 1.33 kilograms per unit.

Roscosmos Ready to Continue Delivering Mixed Crews to ISS After 2018