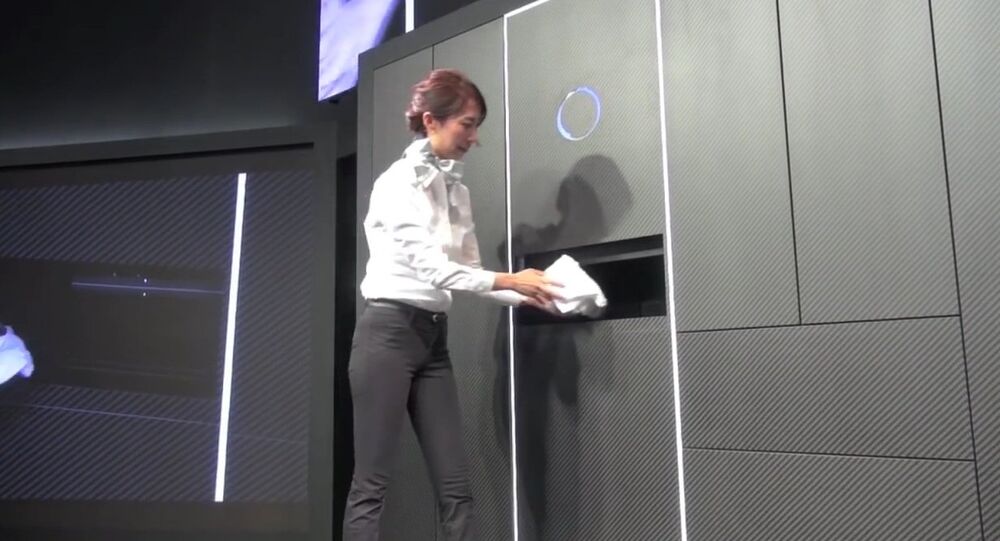 Laundroid: 'Space Odyssey'-Inspired Robot Wants to Do Your Laundry (VIDEO)

A Japanese inventor constructed a robot which can wash, dry and neatly fold garments to liberate humanity from laundry. The ‘Laundroid’ outwardly resembles something from ‘2001: A Space Odyssey’, but from functional point of view it is a significant downgrade over the sci-fi ‘Monolith.’

The Japanese inventor Shin Sakane received ¥6 billion ($53 million) from partners, including Panasonic Corp., last month to advance “the Laundroid” – a robot Sakane is developing to not only wash and dry garments, but also sort, fold and neatly arrange them, the Japan Times reports.

The refrigerator-size device could eventually fill the role of washing machine, dryer and clothes drawer in in a single device.

Sakane, whose earlier inventions include an anti-snoring device and golf clubs made of space materials, said the funding will bring his dream of liberating humanity from laundry one step closer.

Among his inspirations for the project is the 1968 Stanley Kubrick sci-fi film classic “2001: A Space Odyssey.” Laundroid was designed to resemble the mysterious objects in the film that brought technology to prehistoric humans, and the project was originally code-named “Monolith.”

“That’s what we had in-mind: a technology that never existed on Earth descends from space,” Sakane told the Japan Times in an interview at his Tokyo office.

While the full product is slated for release in 2019, an early version that can only sort and fold clothing goes on sale worldwide in March.

The goal is to eventually get the price of the full version to less than about ¥300,000 ($2,700). According to the report, the model going on sale in March will probably cost significantly more due to higher initial production costs.

Sakane hasn't divulged exactly how Laundroid works, but patents show that users dump clothes in a lower drawer and robotic arms grab each item as scanners look for features such as buttons or a collar. Once identified, the clothes are folded using sliding plates and neatly stacked on upper shelves for collection, the report says.

Users will still have to do some tasks, such as partially buttoning shirts, ensuring clothes aren’t inside out, and bunching socks before putting them inside the machine. That’s because even the best machine-learning applications can’t figure out how to fold a pair of socks.

Each item takes about 10 minutes to fold, as the robot scans each part of the clothing and communicates via Wi-Fi with a central server. Sakane is working to get it down to five minutes, the robot was designed to be used passively while people are doing something else or out of the house, he told the Japan Times.