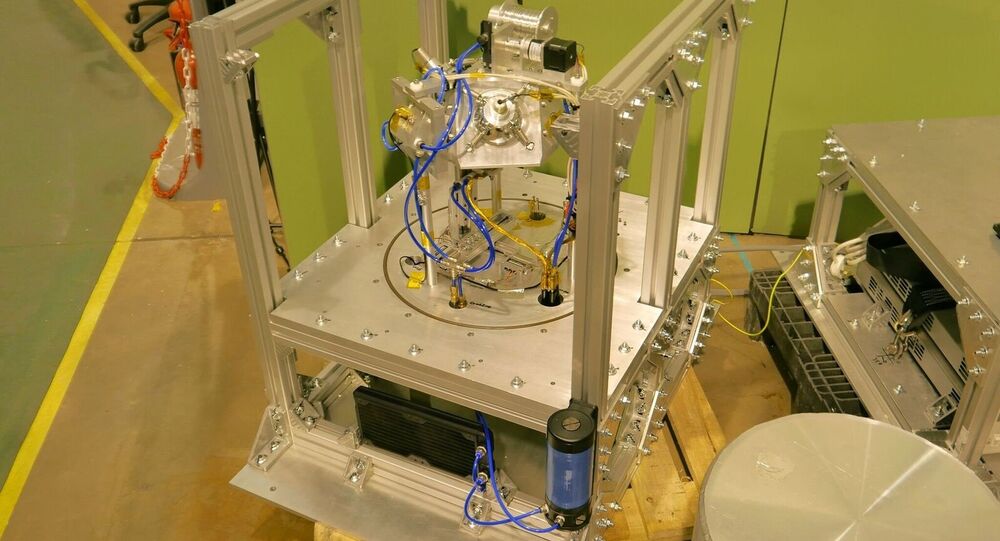 British scientists at the Birmingham University, have developed a 3D metal printer that can function in zero gravity and will enable astronauts to easily produce vital spare parts while they are on space missions.

The process of 3D metal printing of advanced engineering components, is also known as 'addictive manufacturing' or 'selective laser melting.' It is a process by which complex items — such as an engine component — can be printed in 3D in their finished state, rather than machining them from bulk.

The technology was developed by PHD student Dr. Luke Carter from the University of Birmingham, who has worked extensively on the technology.

"We are at the heart of the third industrial revolution — using 3D printing techniques to make components out of metal. We are the only university in the UK to use a variety of metals in this way, especially the laser and powder based techniques," Dr. Carter told Sputnik.

The prototype has even been tested on the European Space Agency's (ESA) 'Vomit Comet,' a device used to stimulate the weightlessness of space.

Dr. Carter said that the impact of this device on the world of 3D printing is good and that it will hopefully add huge benefits:

"In its current form the demonstrator is an experimental system for a very specific application, however we are hopeful that in the future some of the benefits of this system may filter through to a 'terrestrial' commercial model aimed at the hobbyists and niche users who may want to 3D print metal as well as the established polymer systems."

The system also offers cost saving methods, as compared to current solutions it is less expensive and could save the industry hundreds of thousands of pounds.

Mr. Carter believes that although they have a few more years of testing to go, this prototype may be the metaphorical ancestor of a low-power, small scale and economical to run metal 3D printing system which could remove many of the barriers currently associated with additive metal processes.

The ESA may have tested the system; however it is someway away from becoming a space-based system.

The development of a space-based system may be a few years away yet; however according to Dr. Carter, what has been achieved over the last month is an important step forward in the development of this system.

"We have come back to the lab with a large amount of data relating to how the system operates as well as our experimental experiences of its behaviour in 0g [zero gravity]. From this we are looking to refine the design, improve its performance, and generally hone the design to remove those niggling bugs that are always present in an early prototype. From this point we will once again be working closely with the European Space Agency (ESA) to establish how best to move forward. I think that it is realistic to imagine that an International Space Station (ISS) compatible system could be in place by 2020, subject to a smooth program of research," Dr. Carter told Sputnik.

Dr. Luke Carter and his team have worked hard to produce this new technology for approximately three years. Much of the early work was testing different ideas and possibilities.

The 3D metal printer is certainly a development in the world of metal production and will benefit astronauts in space. The development of the system has been funded by ESA and as a research group, Dr. Carter and his team, have worked very closely with them on several projects.

The next step for 3D printing will no doubt involve greater heights.

Russia's First 3D Metal Printer Shows What It Can Do

The Riddle of the Cube: Watch a 3D Printer Get Completely Disassembled