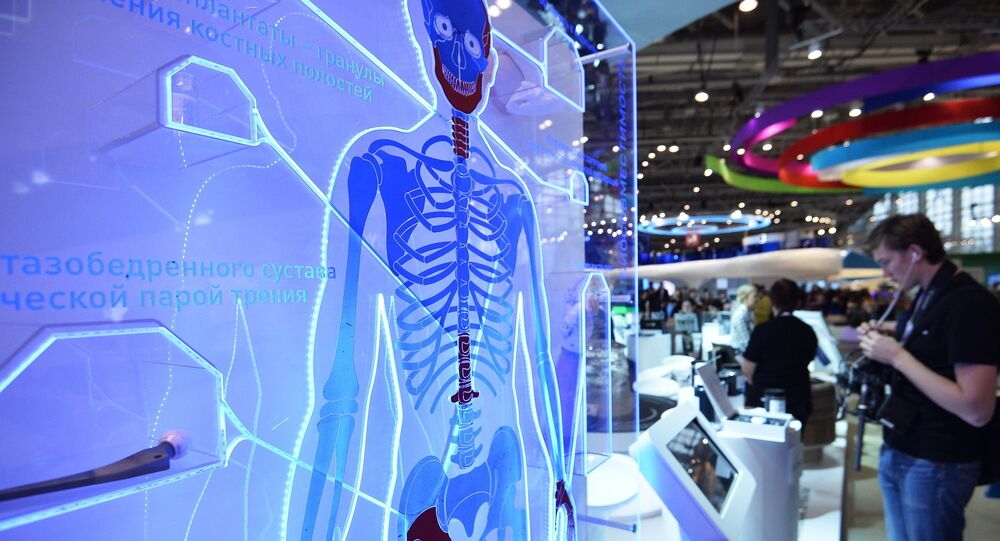 Russian researchers are working on creating more biologically-compatible implants that either utilize or are manufactured entirely out of biodegradable materials that will help to heal fractured bones more efficiently, Roman Surmenev, who heads the Center of Technology at Tomsk Polytechnic University told Sputnik.

Metal implants are used to reconstruct bones in trauma surgery, orthopedics, dentistry, as well as oral and maxillofacial surgery. The key challenge involves tackling potential rejection and body adaptation to the implant. This is what researchers at Tomsk Polytechnic University are trying to tackle.

"The body perceives an implant as a foreign substance. As a result it tries to get rid of it. We are working on biologically-compatible coverings for metal implants. It is an extremely thin film made of calcium phosphate, a material that are bones are made of. The body perceives such an implant as its own and quickly adjusts to it. After that the covering dissolves," he explained.

© Sputnik / Ruslan Krivobok
Whole World Under Microscope: Russian Company Conquers Nanotech Market
Surmenev said that they were adding silver to the covering which helps to kill pathogenic bacteria. The Center is also working on a covering with silicon with makes the implant more bioactive for people with impaired immunity.

Fifteen researchers working at the Center of Technology cooperate with their colleagues from several universities in Germany.

"Scientists in the West are extremely interested in our ideas," he said. "Implants utilizing biocompatible covering have been successfully tested on animals in Russia. Human trials are coming. If they are successful, we could introduce our solution in three to four years."

Researchers at the center are also working on biodegradable implants created using artificial tissue that mimics the functions and the structure of living tissue for a limited period of time. These studies will help to create implants meant to cure fractures by helping the fractured bone perform its functions, as well as stimulating its growth, recovery and healing.

© Photo : 3D Bioprinting Solutions
Stamping Out Disease: Russian Scientists Aim to Bioprint Human Kidneys By 2030
Biodegradable implants have an additional advantage over metal ones. They are capable of gradually dissolving, meaning no additional surgery is required to remove them.

Researchers in Tomsk have been tasked with changing the surface of the polymers so that connective tissue links to and expands on the implant's surface. This has been the key challenge when it comes to creating biodegradable implants.

The new material that Russian researchers are working on will mimic the structure of bone tissue. It will also have mechanical qualities close to the fractured part of the bone. It will have the same chemical composition, while its surface is expected to help the intergrowth of living tissue.

The Craziest Inventions From Russia That Actually Got a Patent