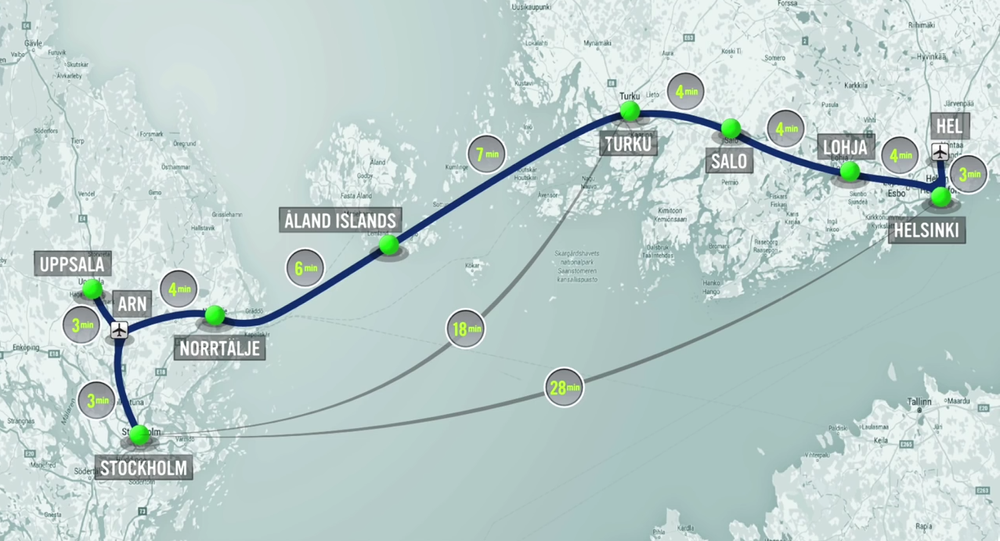 Today, the Nordic capitals of Helsinki and Stockholm enjoy regular flights and ferry cruises. In a bid to revolutionize passenger traffic, Finland is considering launching Hyperloop to Stockholm, which would become the first of its kind in Scandinavia and reduce the voyage to a mere half an hour at staggering speeds of up to 1,200 km/h.

© Flickr / Nikodemus Karlsson
Pipe Dream: EU Finances Feasibility Study of Baltic Railway Utopia
The ultramodern technology provided by American company Hyperloop One could allow Nordic passengers to zoom from Helsinki to Stockholm in about half an hour in a capsule whizzing inside a tube, reaching a mind-blowing speed of 1,200 kilometers per hour. Of course, the futuristic project is far from cheap. The price tag for the underwater tunnel through the Baltic Sea is expected to reach $20 billion (for the sake of comparison, a to-be-built nuclear power plant in Pyhäjoki is estimated to cost $8.5 billion)

At present, negotiations on the technical details, funding and safety matters are underway between Hyperloop One, Technical Research Center of Finland VTT, the Finnish Funding Agency for Technology and Innovation Tekes, as well as several related ministries, Finnish national broadcaster Yle reported.

Before pioneering Hyperloop in the Baltic Sea, Finland is also all set to become one of the first practitioners of the futuristic technology. A test track for Hyperloop may be launched between the Finnish cities of Salo and Turku. Previously, the city of Salo signed a letter of intent with Hyperloop One.

In the future, the 50-kilometer-long route between Turku and Salo may be expanded with a 140-kilomter-long stretch to Central Helsinki and Helsinki Airport. In the final stage, a 200-kilometer stretch dipping above and below the Åland archipelago in the Baltic Sea between Finland and Sweden is expected to be built. If completed, this may become one of the world's longest subsea tunnels.

​The average cost for a Hyperloop journey between the Nordic capitals was earlier estimated at 170 SEK (roughly $20 or €17), with is comparable to a taxi ride in central Helsinki or Stockholm.

© AFP 2021 / JONATHAN NACKSTRAND
Krona Goes Digital: Sweden Poised to Launch First Electronic Currency
According to Mikael Nyberg, networks director at the Finnish Transport and Communication Ministry, the preliminary negotiations are expected to be finished by the end of the year.

Besides Hyperloop to Sweden, Finland is also toying with the idea of a subsea railway tunnel to Tallinn, Estonia. The over-adventurous project is expected to reduce the journey between the two capitals from two hours by ferry to half an hour by train across the Gulf of Finland. The grandiose scheme includes an 80-kilometer-long tunnel through the solid rock of the Baltic seabed.

Despite the fact that the idea of linking Helsinki and Tallinn by rail gained widespread support among local politicians, research carried out in the summer of 2016 indicated serious technical difficulties to sort out. According to the Geological Survey of Finland, one particular challenge could be found at the Tallinn end of the tunnel, citing soft soil and problems with ground water.

​Remarkably, the idea of connecting Helsinki and Tallinn is in fact over a century old. In Harju County, Estonia, drawings of a balloon-lift bridge to Helsinki were found, dating back to the 1870s.