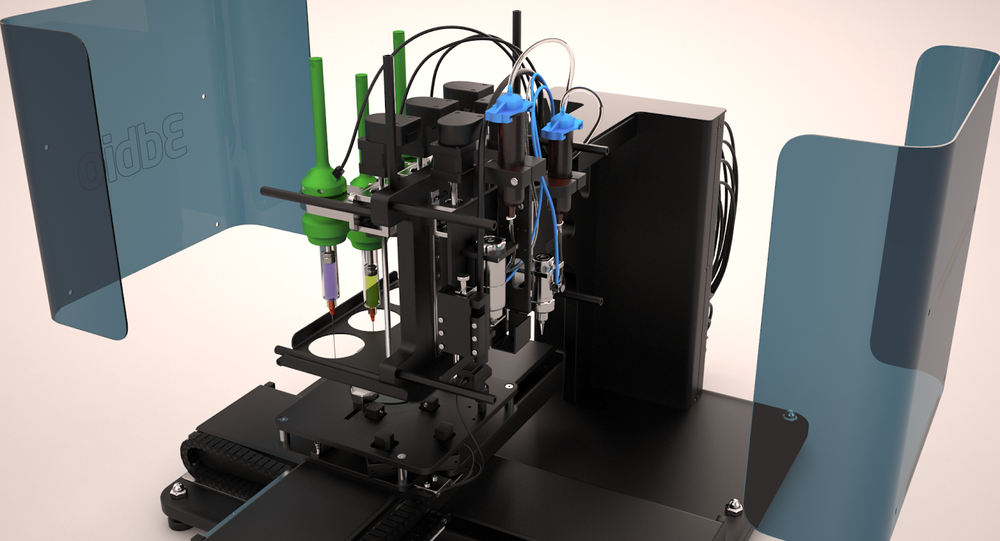 After 3D-printing a mouse thyroid gland and successfully transplanting it last year, Russia's 3D Bioprinting Solutions is aiming to make a human kidney by 2030, the company's scientists told Sputnik.

© Sputnik / Sergey Guneev
Canada Labels Campaigning for Your Own Organ Donors 'Ethically Acceptable'
Last year Russian scientists based at the Skolkovo Innovation Center used the country's first bioprinter, called Fabion, to make an artificial thyroid gland and successfully implant it into a mouse.

The first 3D bioprinter was developed by American bioprinters Organovo in collaboration with Australian designers Invetech in 2009. Since then, a handful of bio-printing firms have developed their own version, including Russia's 3D Bioprinting Solutions.

3D bio-printers can range in price from $200,000 to one million dollars, and Fabion costs a relatively economical 15 million rubles ($233,000). The printer has interested buyers in Russia and abroad, and the first commercial models are being sent to US scientists at the universities of Harvard and Stanford.

© Photo : 3D Bioprinting Solutions
Russia's first 3D bioprinter
"Our printer is capable of printing cells, spheroids and biogel. It contains five nozzles that can print in three different cell types in the desired combination. Two other sharp nozzles are designed for the layering of extrusion hydrogels, and the application of hydrogels and bio-prints of various shapes."

"Another important point, is that 95 percent of the world's bioprinters simply print hydrogels with cells. This technology doesn't give the required tissue density because the cells are printed too far from each other. The Russian bioprinter has the world's highest print density and gives the natural and printed organs an almost perfect conformity," Hesuani said.

Over 80 percent people waiting for donor organs need a kidney transplant, and the scientists are aiming to 3D bioprint a kidney by 2030.

Along with many other countries, Russia suffers from shortage of donor organs, and each year tens of thousands of people die while waiting for an organ transplant.

In general, there is a high risk that organs from a donor may rejected by the patient's immune system. This requires the patient to take immunosuppressant drugs which can leave the patient vulnerable to other illnesses.

However, a bio-printed organ would be produced using the patient's own stem cells, making immune rejection a thing of the past.

As well as organ donation, scientists expect bio-printers to play a key role in pharmaceutical research, since bioprinted constructs made from human cells can be used to test new drugs at the pre-clinical stage.

"This is a big saving of time and money for pharmaceutical companies. It costs a lot more to change the formula of a medicine if toxicological or other adverse effects of the drug are discovered during tests on humans," explained Yulia Smirnova, marketing director at 3D Bioprinting Solutions.

"It is worth noting that the market requires constructs of both healthy and unhealthy cells, depending on the problem under investigation by pharmacologists," she added.

As well as the Fabion 2.0 next-generation bio-printer, the team is developing a so-called "Biopen," a compact bioprinter which would allow surgeons to print structures at the bedside of a patient. For example, it could be used to make new skin for burn victims.

They are also creating a magnetic printer for use in space, where weightlessness presents a challenge to the usual 3D bio-printing method of printing layer upon layer. Last year the company signed an agreement with Roscosmos' Joint Space Rocket Corporation to send a bioprinter to the International Space Station in 2018.