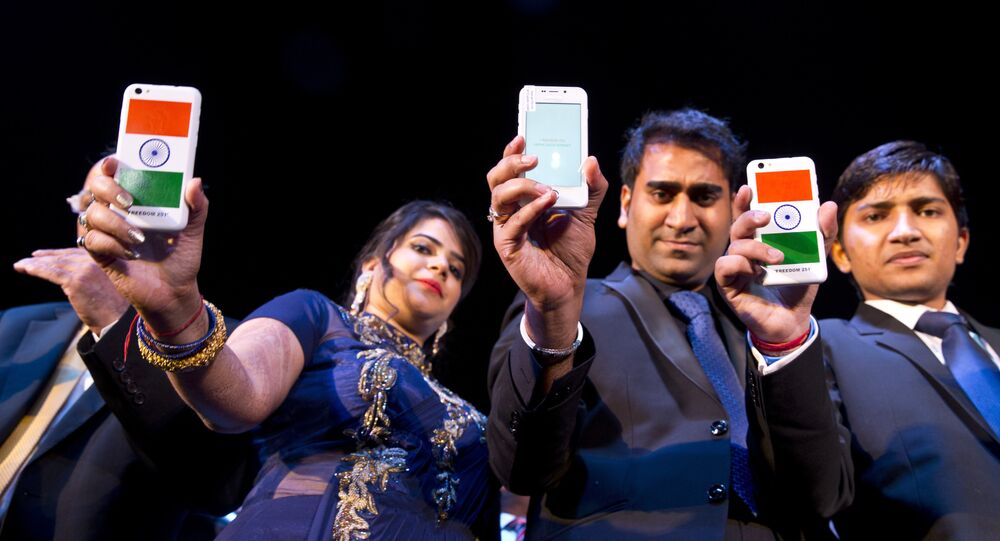 While India has replaced the US in terms of its number of smartphone connections, it has to cover a huge distance to catch up with China.

© Photo : Pixabay
Cyber Alert: Cell Phones Banned From Indian Gov't Meetings Amid Concerns of Hacking
New Delhi (Sputnik) — India has emerged as the second-biggest market globally in terms of smartphone connections, toppling the US and trailing only behind China. The total number of smartphone connections in India as of the end of June 2016 stood at 275 million, higher than 259 million connections in the US, according to Groupe Speciale Mobile Association (GSMA). However, even this number is dwarfed by the total size of China's mobile subscriber base. According to the report, China’s overall smartphone connections numbered 910 million at the end of June 2016, almost three times as many as in India.

The GSMA, in its “India Mobile Economy 2016 report,” predicts that the number of smartphone subscribers is expected to increase to 670 million by 2020 due to reduced tariffs and the growing availability of affordable smartphones for consumers. Additionally, by 2020, almost half of all connections will run over mobile broadband networks.

The report also predicts a significant jump in the 4G-connection base, to 280 million by 2020 from just 3 million as of the end of 2015. The entry of new telecom players like Reliance Jio and increased competition will help boost the numbers.

The report says almost half of India’s one billion plus population is currently connected through a mobile service. The country had a unique user subscriber base of 616 million as of the end of June 2016, making it the second largest mobile market in the world.

India is expected to add another 337 million new unique subscribers by 2020, increasing the penetration rate to 68% from its existing 47% as of the end of 2015. It will be on the back of the improved availability of affordable smartphones, lower tariffs and enhanced network coverage.

In recent months, telecom operators such as Reliance Jio, Bharti Airtel, Vodafone and others have announced measures to expand their coverage across the length and breadth of the country. The telecom industry has attracted foreign direct investment (FDI) worth 18.38 billion USD between April 2000 and March 2016, according to the data released by Department of Industrial Policy and Promotion (DIPP).

The GSMA report highlighted that revenue generated from data services contributes just 17% at the end of 2015. This, however, will change with data traffic set to clock a compound annual growth rate of over 60% between 2015 and 2020. The rise in social media communication and networks are expected to fuel this growth.