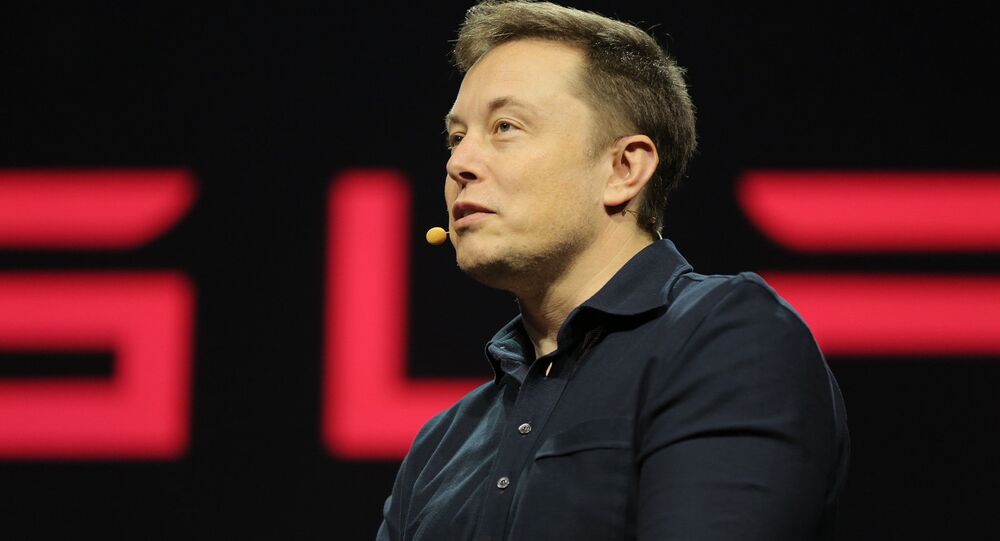 Elon Musk, chief executive of Tesla Motors and SpaceX, debuted new solar roof tiles that eliminate the need for traditional panels and provide longer-lasting home battery capabilities. In light of the new product, Sputnik takes a look at how much renewable energy is used in the US.

© Photo : Facebook/Hyperloop Transportation Technologies
Levitation Force: Working Prototype of Elon Musk’s Hyperloop Train Takes Off (VIDEO)
The presentation of the Powerwall took place on Friday, October 28 in Los Angeles, on the eve of a vote to merging Tesla Motors with SolarCity.

Musk wants to combine his firm which produces electric cars and batteries with solar installer SolarCity. A vote on the acquisition is due on 17 November. The rollout of the product is expected to take place by next summer, but it would be “unwieldy” if the two companies are not combined, Musk said.

“This is sort of the integrated future. An electric car, a Powerwall and a solar roof. The key is it needs to be beautiful, affordable and seamlessly integrated,” Musk said while showcasing the products in Los Angeles.

According to Musk, Tesla's new line of solar roofing is designed to blend in with the average house.

​He said that the textured-glass tiles would be more durable than most other roofs and appeal to people who might not like the concept of bulky utilitarian slates atop their houses.

A Tesla in every driveway at the film set where the Tesla event is pic.twitter.com/WVObMpHAId

​The US is among the top countries in the world for solar electricity and several of the world's largest installations are located in the American Southwest.

The oldest solar power plant in the world is the 354-megawatt (MW) SEGS thermal power plant, situated in California. Similarly, the Ivanpah Solar Electric Generating System is a solar thermal power project in the California Mojave Desert, 40 miles southwest of Las Vegas, which has a gross capacity of 392 MW.

© AP Photo / Xinhua, Liu Xiao
Rise and Shine: Hong Kong to Invest $1 Billion in India’s Solar Energy
According to a study by the Solar Energy Industries Association and GTM Research, 878 megawatts (MW) of photovoltaic (PV) capacity and 78 MW of concentrating solar power (CSP) were installed in the US in 2010. That is enough to power approximately 200,000 homes.

In addition, more than 65,000 homes and businesses added solar water heating (SWH) or solar pool heating (SPH) systems. This was double the 435 MW installed in 2009 around the US.

​Based on a 2011 survey conducted by independent polling firm Kelton Research, nine out of 10 Americans support the use and development of solar technology. Eight out of 10 respondents stated that the federal government should support solar manufacturing in the US and should give federal subsidies for solar energy.

Musk said his vision has always been bigger than simply automobiles, and his “master plan” is to become a “vertically integrated energy company offering end-to-end clean energy products to our customers.”

​He declined to provide specific pricing details of the new products but said factoring in the cost of installation, energy savings and durability of a Tesla-SolarCity roof would be better than the conventional, non-solar variety.

“Global warming is a serious crisis, and we need to do something about it,” Musk said. “We need to do everything we possibly can to accelerate the transition to sustainable energy.”