As the mystery around Tabby’s Star continues, the Breakthrough Initiative is preparing to commit massive resources to the settle the "alien megastructure" debate.

The more fanciful answer is that KIC 8462852 is surrounded by a Dyson sphere, an alien megastructure built by an advanced civilization to harness the sun’s energy.

The Breakthrough Listen initiative, founded by Russian tycoon Yuri Milner, plans to spend over $100 million to investigate the star over the next ten years.

"The Green Bank Telescope is the largest fully steerable radio telescope on the planet, and it’s the largest, most sensitive telescope that’s capable of looking at Tabby’s Star given its position in the sky," Breakthrough Listen co-director Andrew Siemion said in a statement, according to Space.com.

"We’ve deployed a fantastic new SETI instrument that connects to that telescope, that can look at many gigahertz of bandwidth simultaneously and many, many billions of different radio channels all at the same time so we can explore the radio spectrum very, very quickly."

The telescope’s observations began Wednesday night, and will continue for eight hours each night, for three nights over the next two-month period.

Other organizations have launched independent investigations into Tabby’s Star, including a Kickstarter campaign launched by the Yale astronomer Tabby Boyajian, who penned an initial study into the strange celestial object. Having raised over $100,000, that project plans to spend a year analyzing the star’s luminosity with the Las Cumbres Observatory Global Telescope Network. 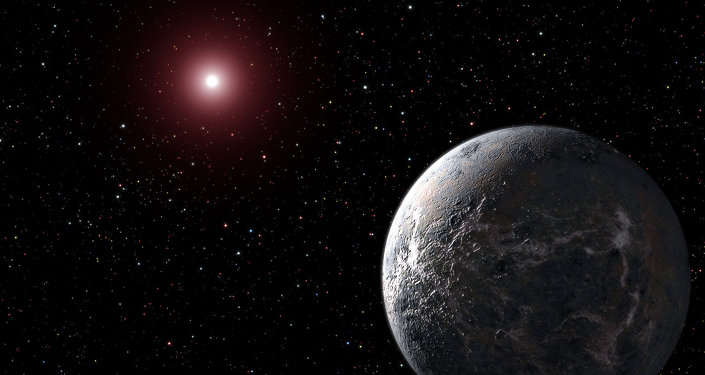 NASA
Earth-Like, Water-Rich Planets Could Be Common to Red Dwarfs

As to whether new observations will uncover aliens, most scientists remain skeptical.

"I don’t think it’s very likely – a one-in-a-billion chance or something like that – but nevertheless, we’re going to check it out," Dan Werthimer, chief scientists at Berkeley SETI, said in the same statement.

"But I think that ET, if it’s ever discovered, it might be something like that. It’ll be some bizarre thing that somebody finds by accident…that nobody expected, and then we look more carefully and we say, 'Hey, that’s a civilization.'"

Of course, even if the Dyson sphere theory turns out to be true, that does not necessarily indicate life. Given the distance of the star, it will have taken 1,500 years for its light to reach Earth, meaning that we can only observe the star as it was 1,500 years ago.

The civilization could be long gone.