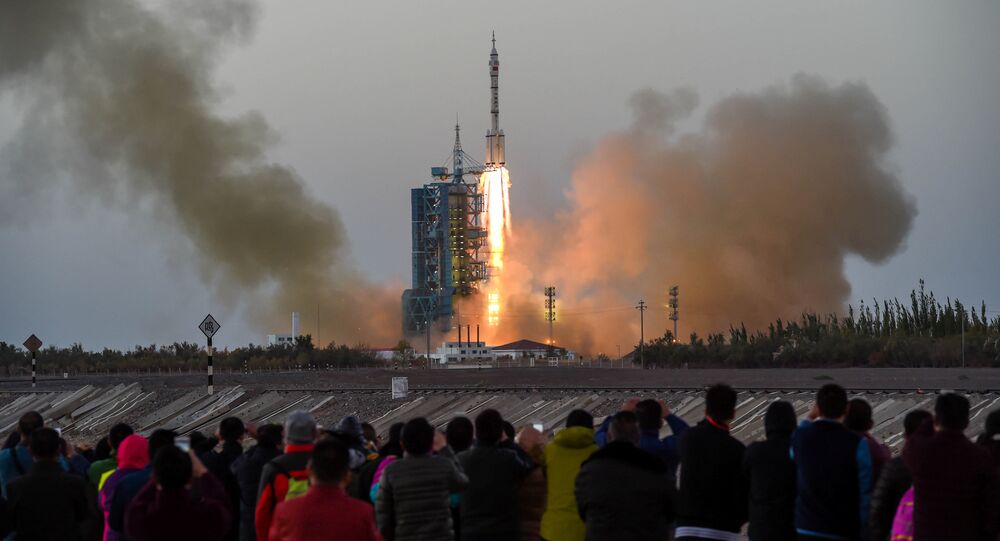 In the decade to come Russia will face strong competition from China for the commercial launch of satellites for developing countries, according to Ivan Moiseev, director of the Institute of Space Policy.

"It has constructed a new spacecraft launch site and is busy searching for business contracts in the segment where Russia is currently active, the segment of commercial launch of satellites for developing countries. In other words, it has become Russia's direct competitor," the expert added.

© AFP 2021 / FILES
China Launches Shenzhou-11 Spacecraft With Two Crew Members
He noted that there is already competition in the space launch market between the two countries, however it will get much stronger in the years ahead.

"It takes about three years from the date of signing a contract to the actual launch of a space vehicle. In two or three such cycles, or in five to ten years the two countries will face-off in the market," said the head of the institute.

Moiseev however noted that Russia has already responded to China's developing space industry.

"Russia has lowered prices for the launch of its Proton rockets (the most recognizable of Russia's rockets) and is developing new, more cross functional boosters on the basis of Proton. In other words, it is doing what should be done in this situation," he said.

Earlier in September, Khrunichev and International Launch Services (ILS), the team behind Russia’s Proton rocket, announced that they are developing two scaled-down versions of the booster in a bid to capture a wider share of the commercial launch market.

Stephen Clark from Spaceflight Now, the source for online space news, took a closer look at some of the details of the smaller Proton rockets being offered.

"The new configurations are "right-sized" for the current launch market, as some commercial communications satellites are getting smaller with the introduction of innovations like all-electric propulsion, which does away with the need to put hefty liquid fuel loads on spacecraft," said the analyst.

"The basic Proton booster comes in three stages. For commercial missions, the Proton is topped by a payload shroud containing the mission’s satellite payload and a Breeze M upper stage that conducts multiple engine firings to place spacecraft into their proper orbits."
There has been some significant reengineering in respect to the actual propulsion process too.

"The new versions unveiled by ILS and Khrunichev both do away with the second stage and its four engines. The new designs have the Proton’s third stage, powered by a single main engine and four steering thrusters, mounted directly on top of the first stage," said Clark.

"Currently, Proton is focused strictly on the heavy-lift market, where we are highly competitive," Kirk Pysher, the president of ILS said at the time.

"The Proton variants will provide a diverse launch capability for the customer with a two-stage launch vehicle that provides a very elegant solution to diversifying our capability across the small and medium-class payload mass," he added.

They have already docked with the experimental Tiangong 2 space lab and will spend 30 days there, the longest stay in space by Chinese astronauts.