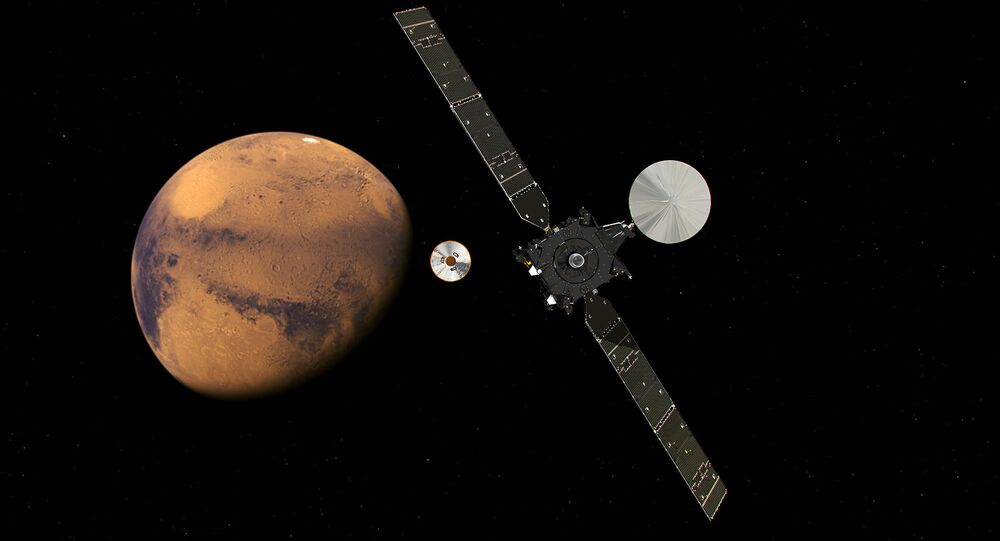 Next week, scientists hope, the ExoMars lander will finally make it to the Red Planet and join NASA’s Opportunity rover in the search for extraterrestrial life.

A joint mission of the European Space Agency (ESA) and the Russian Federal Space Agency (Roscosmos), the ExoMars Schiaparelli EDM (Entry, Descent and Landing Demonstrator Module) will end its seven-month voyage aboard the Trace Gas Orbiter (TGO) and touchdown on Mars.

"The EDM is Europe’s first try at landing on Mars, and as landing systems go, it is pretty ambitious," project scientist Jorge Vago told Sky & Telescope.

"Schiaparelli incorporates a sophisticated Doppler radar to measure distance to the ground and speed over the surface. The information is used to command the pulsed hydrazine engines, which are organized in three clusters of three motors each."

Part of a two-stage mission to search for signs of life on the Red Planet, Schiaparelli will pave the way for a second lander, set to arrive in 2021.

"Our goal here is to prove we can get to the surface, do science, take data," ESA science advisor Mark McCaughrean said, according to Phys.org.

Of course, that work can only be done if Schiaparelli survives the landing intact. It will detach from the TGO Sunday and journey the final 621,000 miles on its own, entering the Martian atmosphere Wednesday.

© Photo : Pixabay
If a Trip to Mars Doesn't Kill You It Might Cause Massive Brain Damage and More

From that point, the descent will take only six minutes.

"It is a complex mission," said mission manager Thierry Blancquaert. "Landing on Mars requires a lot of technology."

In addition to a state-of-the-art heat shield designed to protect the craft during entry, the lander will rely on a supersonic parachute to be deployed at an altitude of 11 kilometers, followed by nine speed-control thrusters.

If all goes according to plan, Schiaparelli will become the first European spacecraft to land on Mars.