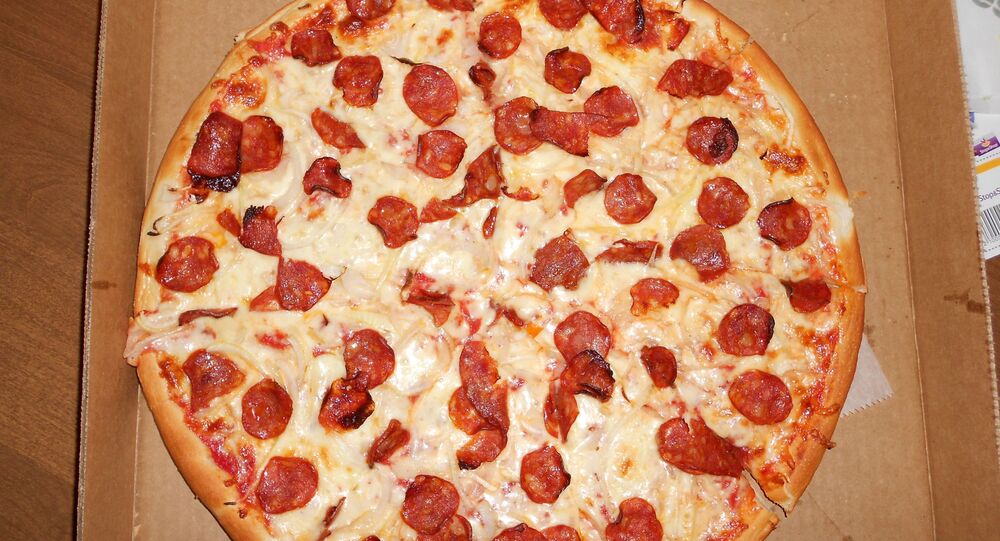 Fresh off the Boat: Now, Pizza Can Be Delivered by Canoe

More and more original ways to get hot slices of your favorite fast food are invented every day. Along with various deliveries via drones, taxis and robots, some orders will be now transported on canoes.

YouTube/Matt Little
Rat Drags Pizza Slice Into NYC Subway, Internet Loses Its Mind
The canoe delivery was launched by Domino's Pizza in the UK, as reported by Mashable. This will be very helpful for those pizza-lovers, who live on little islands or in house-boats.

For the time being, the novel service was tested only on the River Loose in Maidstone, Kent. Couriers delivering pizzas in a canoe wear wetsuits and lifejackets. As for pizza, it is well packed in an unsinkable and waterproof package in case the box accidentally falls into the water.

The first to test this service was local resident Debbie Hayes, whose house is surrounded by water from all sides. Before, she always had a problem with food delivery, as couriers could not bring it on land.

© Photo : YouTube/Starship Technologies
Self-Driving Delivery Robots to Hit Streets in UK, Germany and Switzerland
Earlier, the company announced another original ways to order and deliver pizza. First,  an order could be placed  by tweeting a pizza emoji. However, it works only if the customer registered their profile on the company's site. Then, with a smart device an easy order can be madeb — all that necessary is to press a single button; but it needs connection to the phone via Bluetooth.

Another way to make your take-away experience faster  was offered by Estonian startup Starship Technologies, which created a self-driving delivery robot. The little "robocurier," is actually able to carry any cargo up to 10 kilo and can be unlocked only by the recipient with a special security code.

Interestingly, a similar droid was offered by Domino's Pizza. The company also said it was looking into opportunities for drone delivery, too. The pizza maker carried out a trial delivery by drone in Auckland, New Zealand.

Freshly cooked pizza delivered in 15 minutes maximum — that's what Zume Pizza startup has on offer with their creative on-the-go system. Pizza is cooked in trucks with ovens, while a human worker drives it.

A short-term offer was arranged by Uber taxi service in six Russian cities on April 2016. Pizza could be ordered through the Uber app for 150 rubles (US $2,4); however, this offer lasted for only a few hours.

​An outstanding delivery was done by Pizza Hut — unfortunately, only once. The company delivered a pizza on Kilimanjaro, the highest mountain in Africa. In May 2016, five climbers made a multi-day hike to an altitude of about 5.7 kilometers, all the while keeping a pizza hot with a special burner. Thus, this ascent was placed into the world records  as the highest altitude pizza delivery on land.