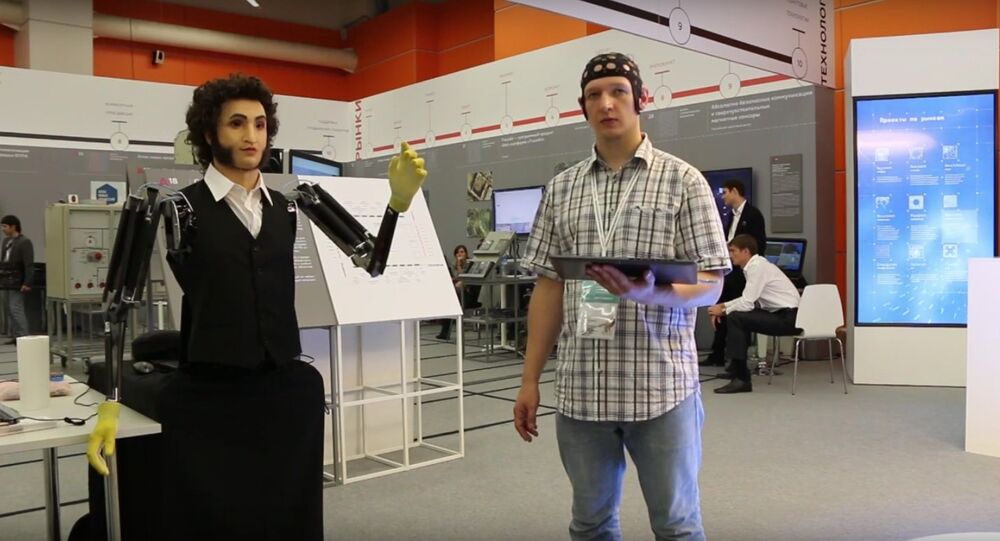 Russian software company Neurobotics is engaged in creating technology that would enable a person to use his or her mind to control computers and computer-assisted technologies including robotic prosthetics.

Speaking to LifeNews from the sidelines of Cybathlon, an assistive technology competition that has been dubbed 'the World's First Bionic Olympics', Neurobotics CEO Vladimir Konishev discussed the bright future of his company's unique technology.

Experimenting for several years in the creation of a brain-computer interface, Neurobotics has now taken the next step, and is developing and improving its a 'neuro-headset', a device that can read signals from the brain's cortex and transmit them to a computer to operate various devices.

The prospective uses for the technology are endless, and include computer-assisted prosthetics. It's only logical, therefore, that Neurobotics is participating in Cybathlon, a competition of athletes with physical disabilities showing off cutting-edge assistive devices, which kicked off in Zurich on Saturday.

© REUTERS / TT News Agency/Anders Wiklund
'I Basically Stumbled on This': Trio of Physicists Awarded With Nobel Prize for Unexpected Discovery
Interviewed by LifeNews on the sidelines of the event, Vladimir Konishev shared some the technical details of the Neurobotics neuro-headset, and discussed its present development state.

"The neuro-headset consists of a neoprene cap-helmet with embedded electrodes," the engineer explained. "The rear has a bio-amplifier for transmitting data via Bluetooth to the computer. Right now the main challenge lies in the fact that such headsets use electrodes that use electrically conductive gel. That is, someone must apply the gel to the user, meaning an assistant is required."

Accordingly, "the next step for us is creating a neuro-headset with dry electrodes." Konishev suggested that his company is looking at doing so by next year. "After the appearance of such a device, the brain-computer interface can be used by large numbers of people without any outside help. Thus, the new models will be easier to use and will be much more aesthetically pleasing."

The engineer stressed that his company's primary task was to develop a neuro-headset "that could be used not only in a laboratory, but also in everyday life. This goal was given to us in the framework of the project for the Foundation for Advanced Studies," a state fund that promotes innovative technologies.

© Photo : PIxabay
125 Years - the Final Frontier of Human Existence
"We worked hard to ensure that the neuro-headset was wireless, and has a small number of channels, so that a person could simultaneously move about and manage the robotic device, whether it be a quadrocopter or wheeled robot."

As for the use of the technology to assist people with physical disabilities – including prosthetics, Konishev explained that this is possible after some training, enabling the user to give the necessary mental commands. "These commands are fairly easy to trigger…Training takes about 30-60 minutes, during which most people can master three basic commands. To manage a smart home or play computer games this is enough. But to control quadrocopters, for example, requires four commands" (and thus takes a little longer).

The uses of the technology for improving the lives of people with impaired motor function are tremendous, the engineer emphasized. "For example, people that are completely paralyzed can control smart home infrastructure. In one of our videos we demonstrate a person mentally bending and unbending the exoskeleton around his wrist – that is, factually moving his hand just like a healthy person."

The technology can also allow users "to remotely control home appliances – to turn on the TV or air conditioning. Here the system is rather simple – mentally switching on the outlet to which the appliance is connected. This is not science fiction – but already a reality." And there are other uses too, Konishev added, from communication by mentally typing text, to allowing someone who is completely paralyzed to control a wheelchair using his or her neuro-headset.

Neurobotics is also looking at the creation of a hybrid neuro-interface, with several technologies complementing one another. For example, Konishev noted that a system using eye-tracking can complement the brain signal-based neuro-headset to help someone with limited motor function to move about and carry out a variety of tasks. A combination of technologies would simplify the brain processes required to accomplish tasks.

© Photo : Pixabay
Paranoia or Premonition: Tech Billionaires Want to Save Humanity From the Matrix
In addition to helping people with disabilities, the company is also developing a number of commercial niches –including neuro-piloting lessons at schools, a pilot program at about ten institutions across Russia providing children the opportunity to pilot quadrocopters using their minds.

"We can say that this is a new direction in education and business…For students it seems like telekinesis – something new and different. These lessons develop an interest in robotics and neuro-control, and increase their interest in the hard sciences – physics, cybernetics, neurophysiology. Such motivations can affect their career choices, and thus bring new young professionals to our area."

In addition, the company is already working on giving third party software developers a hand in developing programs and games using neuro-headset, based on the successful experience of companies like NeuroSky.

Emphasizing that his company is grateful for state support for its projects, Konishev admitted that there is definitely still room for improvement, particularly as far as paperwork and bureaucracy are concerned.

The engineer stressed that on the whole, Russian engineers' work in the neuro-technology sector doesn't lag behind that of leading countries, and in some areas is even at the forefront. "Cybathlon allows us to compare our neuro-interfaces with the developments of other countries. Our obvious advantage is the simplicity of our system. After all, the simpler the technology, the safer it is."

Konishev noted that "if we use this chance and make our technology compatible with standing frames, exoskeletons and other assistive equipment, we can help a lot of people to live a fuller life. After all, Russian products are much less expensive, and more available. Therefore, we also have good potential for exporting our products."

Right now, Neurobotics' neuro-headset costs 80,000 rubles (about $1,285). The company is working to get the price down to 25,000 rubles (about $400), thus making the technology more accessible to mainstream users. Ultimately, Konishev believes that neuro-interface technology will reach the mass market in five years' time – given two years for development and another two for testing, clinical trials and their registration as medical devices.

Trio of Physicists Awarded With Nobel Prize for Unexpected Discovery