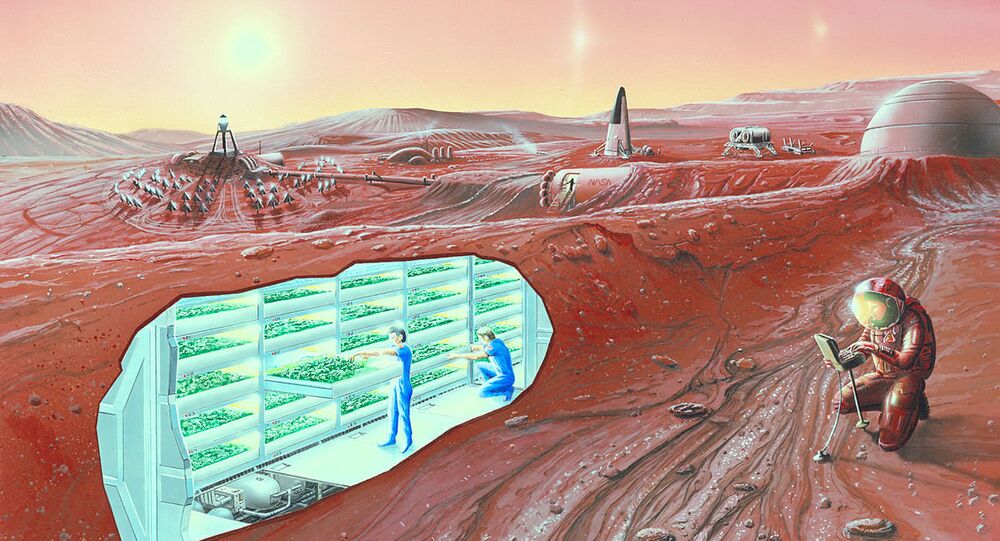 On Tuesday SpaceX founder Elon Musk addressed the International Astronautical Congress and announced plans to colonize Mars, an idea science fiction writers have dreamed about for more than a century.

Musk is CEO of SpaceX, which makes and launches rockets. He also directs several other projects, including Tesla Motors, SolarCity and OpenAl.

The entrepreneur unveiled the company's new proposal, the Interplanetary Transport System spaceship which would theoretically be able to carry millions of humans to Mars. The proposed system uses a new rocket and spaceship which are currently in development at SpaceX, called BFR and BFS.

The accompanying promotional video features an illustration of the new rocket and spaceship on a trip to Mars, with human passengers eventually opening the doors to set foot on the red planet.

Musk has revealed details about the BFR and BFS, which will be 122 meters in height on the launchpad, almost twice as tall as SpaceX's Falcon 9 rocket, which recently exploded during a launch on September 1.

For decades, the US National Aeronautics and Space Administration (NASA) has been planning a trip to Mars, and currently aims to send humans there in the 2030s using its Orion spacecraft and Space Launch System.

YouTube: Graphics King
Elon Musk: 'We Have Not Ruled Out' That UFO Caused Space X Falcon 9 Explosion (VIDEO)
While the prospect of sending humans to Mars is a real one, the idea of setting up a human colony there is faced with seemingly insurmountable problems. The Red Planet is a hostile environment to human life, which combines extreme cold with an unbreathable atmosphere and intense radiation.

Elon Musk is keen to show how humans could get to Mars, but the question of how humans might actually live on Mars remains unanswered.

Military expert Vasiliy Kashin told Sputnik that the suggestion of colonizing Mars is really just a propaganda exercise by the SpaceX CEO, who wants to attract more funding for the development of the project.

"Musk is talking about 'colonization,' and creating a relatively autonomous base on Mars. That means that there needs to be not just fully-fledged production of fuel, food and medicine, but a whole industrial economy in miniature. Of course, the reaction of the human body to a long stay on Mars after space flight is also a difficult scientific problem which has only been partially solved during lengthy medical and biological experiments carried out in the US and Russia," Kashin said.

© Flickr / Kevin Gill
Fly Me to the Moon: Russia, US Discuss Lunar Station for Mars Mission
Around 550 humans have been sent into space so far, only four of who have spent more than a year in space. Most recently, astronauts Scott Kelly and Mikhail Kornienko returned to Earth in March after spending 340 days aboard the International Space Station, in an experiment which aimed to find out more about the human body's reaction to long-duration spaceflight.

Kashin explained that SpaceX receives funding from investors and contracts from the US government, but is not forthcoming about its finances. He thinks the bold declaration about colonizing Mars is just a way for Musk to attract more investment.

"The financial performance of SpaceX is not transparent because it's a private, non-public company. Available data suggests that SpaceX depends on two factors for survival: inflating estimates of its value which allows it to raise capital on favorable terms, and receiving government contracts from organizations like NASA and the Pentagon," Kashin explained.

"Propaganda plays a crucial role in solving these two issues. Musk presents his company as an 'effective private enterprise' which is a good alternative to old corporations, state agencies, and satellite launch services provided by non-Western countries," he said.

"However, Musk hasn't expressed any intention of issuing an IPO in the near future, which would require a complete disclosure of the company's financial performance. There isn't any reliable information on whether SpaceX receives any profit from its extremely low ($4,654 per kilogram into low Earth orbit) prices for launching satellites."

© NASA . The Hubble Heritage Team
NASA Thinks They Found Water on Mars: Is There Life on the Red Planet?
Indeed, Kashin believes these low prices are a way of stifling competition for SpaceX, and that propaganda exercises like the Mars colony suggestion allows the company to maintain them.

"It can be assumed that this model aims to retain artificially low prices for long enough to squeeze competitors out of the market. That is how United Launch Alliance president Brett Tobey described SpaceX in a speech in March 2016 (his overly frank speech ended in his dismissal). This kind of strategy can work indefinitely but relies on public interest and favorable media coverage for its success. In these circumstances, advertising future flights to Mars is a rational strategy."