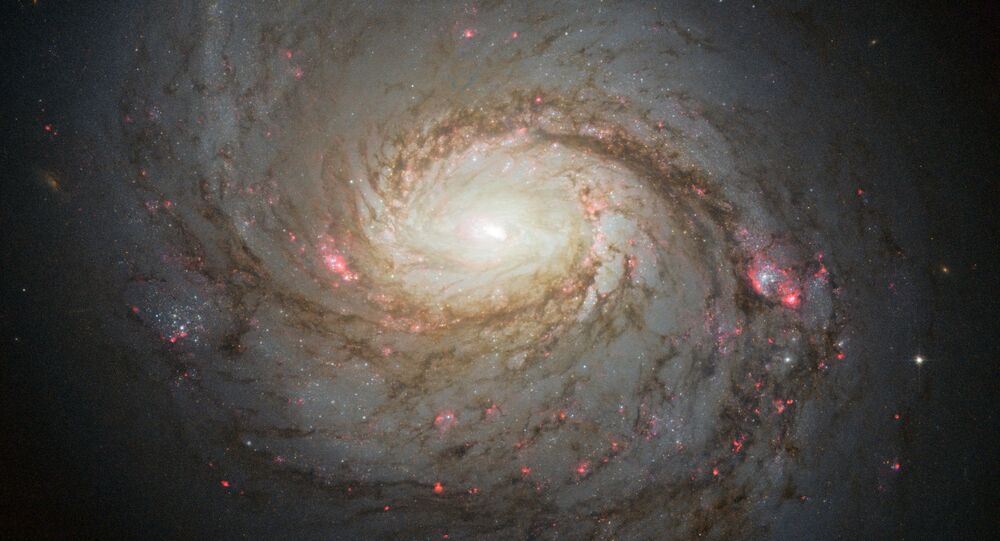 Its big, it glows and its colorful! The space blob that has had scientists confused for decades, now seems to be a mystery solved. It's known as SSA22-Lyman-alpha blob 1 or LAB-1.

Lyman-alpha blob is a a rare, brightly glowing and enormous concentration of gas in the distant universe and scientist have finally figured out why it's so big and it glows.

Lyman-alpha blobs (LABs) are gigantic clouds of hydrogen gas that span hundreds of thousands of light-years. The name comes from the wavelength of ultraviolet light that they emit, known as Lyman-alpha radiation.

Up until now, astronomers wondered why these huge clouds of gas shined so brightly. The answer appears to lie in the two galaxies that are at the heart of the blob and have a large formation of stars lighting up the surrounding area.

These large galaxies, are in the midst of a swam of smaller galaxies.​

Dr. James Geach from the Center for Astrophysics Research at the University of Hertfordshire in England, has studied the blob for quite some time. With the help of Atacama Large Millimetre/submillimetre Array (ALMA) and other telescopes, he and his team have been able to observe light from the dust clouds in distant galaxies to take a deeper look into LAB-1.

This has allowed the team to pinpoint and resolve several sources of submillimeter emission.

The recent discoveries around LAB-1 offer unique insight into how structures in the universe are formed.

"The stuff you see in galaxies is the stars, but a lot of the key astrophysics in galaxy formation is occurring in the immediate region around galaxies," Dr. Geach said in a recent interview.

"Lyman alpha photons are scattering light in the dark matter and giving us insight into its structure."

So it seems that the 15-year mystery has finally been solved, however this is just the beginning. Dr. Geach and his team intend to keep looking, as the region has not yet been fully explored.

Is There Anyone Out There? Galactic Clique May be Snubbing Earth