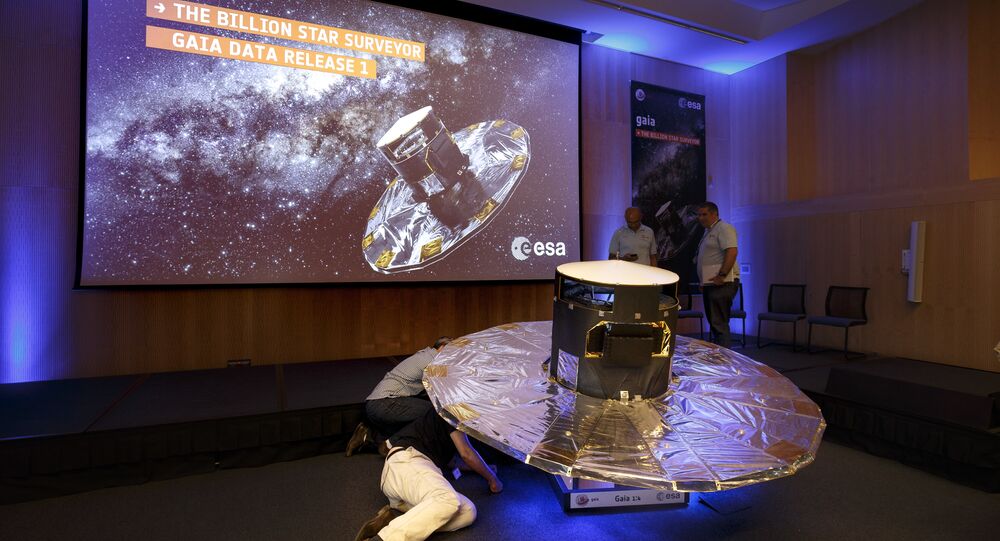 The most accurate 3D map of the Milky Way to date was announced Thursday by the European Space Agency (ESA), a product of the first year of observations by the Gaia satellite.

The Gaia satellite, whose launch was highly anticipated by astronomers, provided the raw data for the 3D map, using results obtained from observations between July 2014 and September 2015. The observations were used to create a catalog of some 1,142,000,000 stars, each accompanied with brightness and location data. Of that total, some two million stars are provided with distance and movement information as well.

"The beautiful map we are publishing today shows the density of stars measured by Gaia across the entire sky, and confirms that it collected superb data during its first year of operations," said Timo Prusti, Gaia project scientist at ESA.

© AP Photo / ESA/Gaia/DPAC
This photo provided by ESA shows an all-sky view of stars in our Galaxy – the Milky Way – and neighboring galaxies, based on the first year of observations from ESA’s Gaia satellite from July 2014 to September 2015

The stars scanned and recorded by Gaia are just one percent of the Milky Way's star total, a number thought to be in the neighborhood of 100 billion. But, according to Francois Mignard, an astronomer with France's National Centre for Scientific Research, and member of the Gaia Science Team, the Gaia 3D map of the Milky Way is unprecedented, as "never have we achieved anything so complete or precise." The data are important for grasping the contents of the Milky Way, as well as its origin and evolution.

© Wikipedia
Chinese Tiangong-2 Lab, Precursor to Space Station, to be Launched on Thursday
The five-year project will continue to scan the galaxy to reduce parallax errors. Knowing the precise location of a star against the background of more distant suns as Earth revolves around our own Sun will help measure distances more accurately. By the end of 2017, Gaia will have collected data for a billion stars including, among other features, temperature, luminosity and chemical composition. The satellite will also observe other space objects, including galaxy cores, planets and their satellites, as well as 250,000 asteroids revolving around the Sun.

Astrophysicists expect to get new information about the existence of dark matter and its distribution, testing Einstein's general theory of relativity by observing the Sun and planets.

"It seems like a good bet that the mission will reveal thousands of new worlds," Gregory Laughlin, Yale University astronomer, told the science journal Nature.

© NASA . JPL-Caltech
Milky Way's Supermassive Black Hole Solves Mystery of Missing Mass
Gaia is currently 1.5 million kilometers from the Earth, in a position called Lagrange point 2 (L2). According to David Milligan, Gaia spacecraft operations manager, "Entering orbit around L2 is a rather complex endeavor, achieved by firing Gaia's thrusters in such a way as to push the spacecraft in the desired direction whilst keeping the Sun away from the delicate science instruments."

Although placing a craft in an L2 orbit is not an easy task, the conditions it provides are advantageous, and an L2 orbit is a destination of interest for future research spacecraft.

Aim for the Stars: Revolutionary Space Project Wants India on Board