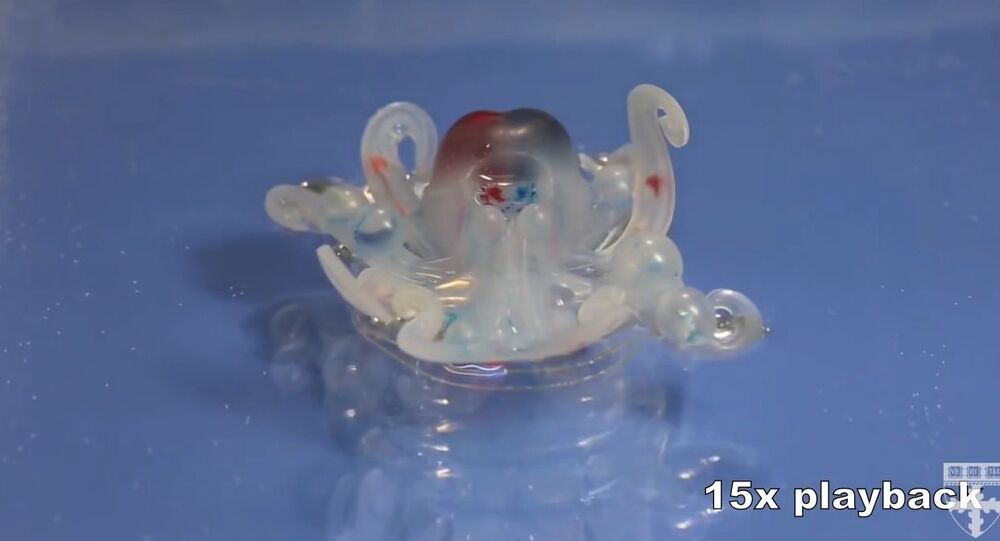 The world's first completely soft robot is a prototype for robots which are gentle enough to work closely with living biological organisms, Michael Wehner of Harvard University, one of the scientists involved in the project, told Radio Sputnik.

Scientists at Harvard University have created the world's first completely soft robot, which doesn't contain any electronics or solid components.

Previous attempts at developing soft robots were hybrids inspired by starfish, worms, caterpillars and other living creatures. However, they still contain rigid components and a power source.

​Michael Wehner, Research Associate in Materials Science and Mechanical Engineering at Harvard University's Wyss Institute, told Radio Sputnik that creating octopus-based soft robot "has been something of the holy grail" for scientists working in soft robotics since the inception of the discipline.

© AP Photo / Elise Amendola
‘Origami Robot’ May Cure Stomach Aches Of The Future
Wehner is one of the creators of the prototype "octobot," and co-author of a paper published in the journal Nature on Wednesday. He said that the movement of traditional robots is more rigid, like a crab, while a robot which has fluid movement like an octopus has a more delicate, gentle touch which is better suited to working with living organisms.

"Ideally down the road we could go into all kinds of places, like inside the human body, into wrecks, or handle all kinds of delicate or dangerous situations," Wehner said.

"One of our goals is to get friendly, softer robots into a human-populated area. Right now you mostly see robots in things like auto-assembly where humans aren't allowed to go where the robots are. We'd like to see this become an avenue for future interaction."

​The 3D-printed robot doesn't use electric power. Instead, it is powered by hydrogen peroxide, a common chemical compound which is found in toothpaste and hair dye.

© Photo : Pixabay
New Silicone Robotic Butt Will Help Doctors Save Lives (PHOTO, VIDEO)
The fluid inside the robot is exposed to platinum infused into the robot's internal network, resulting in the decomposition of the hydrogen peroxide and a burst of pressurized gas which inflates and extends the arms of the "octopus."

"The chemical formula is H202, and that breaks down into H20 and 02, so it gives you a little bit of water and pressurized gas, with the additional benefit that all of your by-products are really benign," Wehner said.