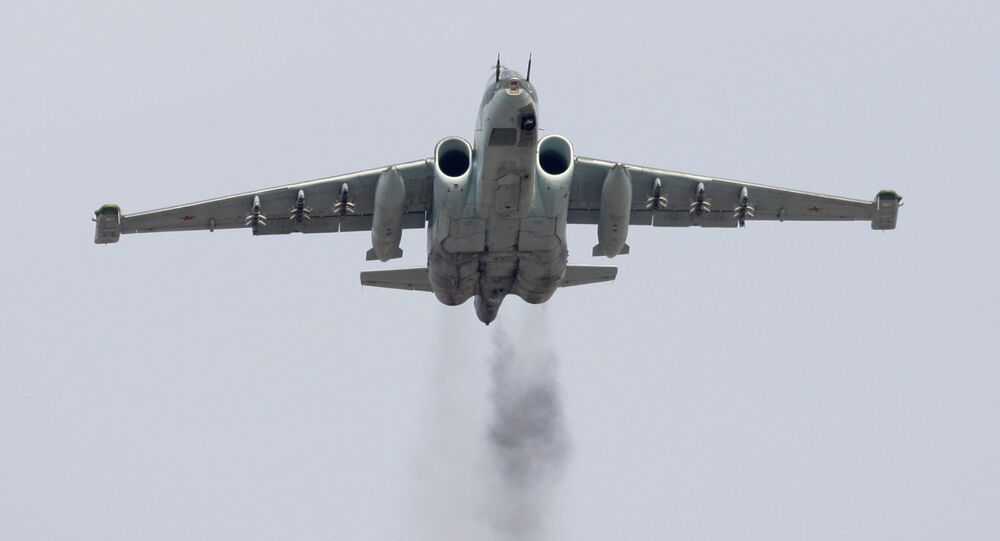 The reason behind SU-25 Frogfoot’s impressive credentials and popularity across the world is that it offers an effective and useful solution to the need to blast targets on the ground, according to the US media.

© AFP 2021 / Dibyangshu SARKAR
Indian Air Force's Most Lethal Fighter Jet Lands Just 100 km From China
The nickname was first used to describe SU-25's Soviet predecessor — armored Il-2 Sturmovik, which gained a reputation during World War II of being able to take a pounding while dropping bombs and firing rockets at German tanks. Il-2's successor, SU-25, is reputedly the most difficult plane in the world to shoot down.

Fast and heavily armed SU-25 attack planes entered production in 1978. They were aimed for "a titanic clash between the ground forces of NATO and the Warsaw Pact", and therefore were capable of flying low and slow to properly observe the battlefield.

Russia’s A-10 Warthog: Why the Su-25 Frogfoot Is a flying tank https://t.co/LYdgYsn6mW pic.twitter.com/U7IBTRtwZU

​Flying low meant invincibility against NATO's deadly long-range SAMs, but not against antiaircraft machineguns. To make sure the plane is protected, the Sukhoi design bureau developed a so-called titanium "tub" that housed both pilot and avionics. Armored plates with a thickness of ten to twenty-five millimeters literally wrapped around the cabin.

No surprise SU-25 has become popular for having survived in most extreme situations on the battlefield. Back in the 90s the aircraft even received its own American computer game.

The closest equivalent to SU-25 is the American tank busting A-10 Thunderbolt II, which is heavier and slower but has longer range and loiter time. But while US Air Force is set to retire the battle-plane six years from now, the SU-25 continues undergoing necessary upgrades allowing it to stay effective.

© Photo : Lockheed Martin
Lockheed Martin Receives $1Bln to Cover F-35 Fighter Jet Production Expenses
Modernized Su-25SM aircrafts have a new BARS satellite navigation/attack system and a whole slew of improved avionics such as news heads-up displays (HUDS), Radar Warning Receivers and the like. They can use the excellent R-73 short-range air-to-air missile, and have improved targeting abilities for laser-guided bombs.

Russia had a lot of experience flying Su-25s as the battle-planes participated in dozens of conflicts around the world. SU-25s have seen action in the service of Macedonia, Ethiopia, Sudan, and finally in 2015 modernized Su-25SM were used in Russia's airstrike campaign against Daesh in Syria. Many observers noted that of the aircraft involved in the mission, the Su-25s were the best adapted for the close air-support role.

"While it's fun to admire high-performing fighters like the MiG-29 or F-22 Raptor, the unglamorous Su-25 has so far had a greater impact on a wide range of conflicts," Roblin wrote.

Sukhoi Aircraft: All Creations of the Legend of Russian Aviation