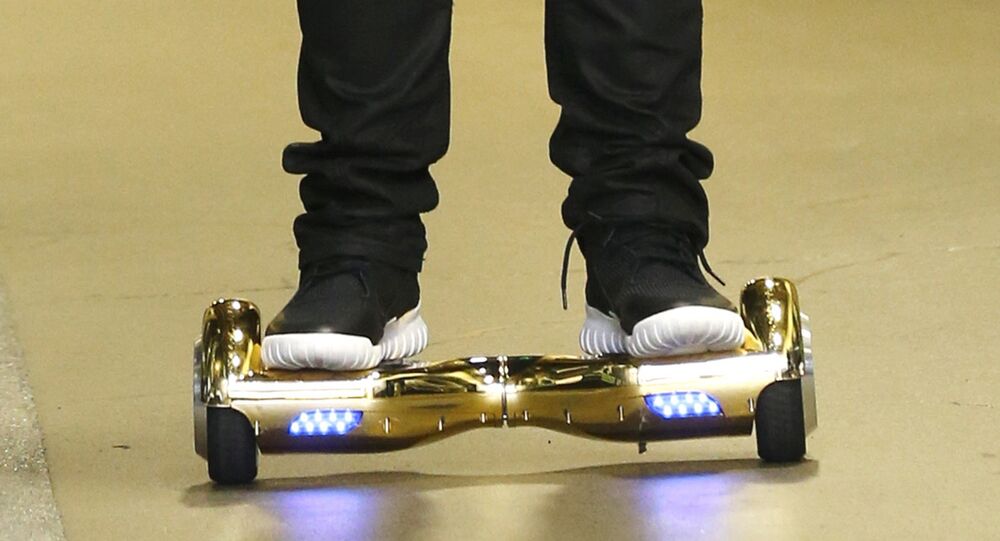 The number of fires involving hoverboards has increased both in Sweden and its neighboring countries. This week, Sweden's Electrical Safety Authority started an investigation to get an overview of why the trendy battery-powered scooters are catching fire.

© AFP 2021 / JONATHAN NACKSTRAND
Sweden is on Fire: Car Arson Epidemic is Catching
The electric self-balancing scooter, consisting of a platform with wheels attached side-by-side and commonly referred to as "hoverboard," has in no time become a fixture among teenagers across the world. However, the latest wave of fires, including two spontaneous combustions in Sweden's Halland County, has forced Swedish authorities to take action and investigate.

"We see that the number of fires has increased and will therefore collaborate with the Swedish Work Environment Authority and the Transport Agency to get an overview of what is actually happening," Martin Gustafsson, Inspector of National Electrical Safety Board, told Swedish national broadcaster SVT.

Lately, a dozen of similar self-ignited incidents have occurred in Sweden alone, yet according to Martin Gustafsson it is yet unclear what exactly causes the fires. A wild guess is the hoverboard's complexity.

​"Hoverboards are filled with batteries and motors. In England and the United States, hoverboards have been known to overcharge, which is hardly a good thing, and then catch fire," Gustafsson told SVT.

In addition to overcharging, the Electrical Safety Board also noted so-called interference issues. Hoverboards are known to send out signals to other electronic devices that make them behave irrationally.

Crazy fact: #hoverboards are too hot to handle sometimes! pic.twitter.com/SbQzxDjpqO

​"These are two separate things, interference issues and battery problems. Both, however, are a very good indication that something is wrong, if you experience either of them," Martin Gustafsson continued.

By its own admission, the Electronic Safety Board hopes to get to the bottom of the combustion problem by examining damaged parts and test-driving hoverboards produced by different companies.

According to Gustafsson, 90 percent of all incidents that happened so far can be blamed on the lack of a proper Swedish manual and the absence of a CE marking, which is mandatory for certain products sold within the European Economic Area (EEA). Unsurprisingly, this is what made hoverboards a cheap, attractive and hip commodity among Swedish youth.

"When you buy a gadget, make sure you get a Swedish manual, if only get the English one, send it back immediately. Otherwise, it is guaranteed that it is not safe at all," Martin Gustafsson recommended to hoverboard riders.

​The majority of self-balancing scooters are powered by lithium-ion batteries. So far, there have been numerous instances of defective batteries and faulty wiring, which led to short circuits and overheating, as well as injuries and lawsuits. In July 2016, the US Consumer Product Safety Commission (CPSC) recalled over half a million of self-balancing scooters, citing safety concerns.

The gyroscopic hoverboard, controlled by the rider's feet, made its debut in 2014 in China, and by 2015 became widely popular in the United States, following numerous celebrity appearances. There is no universally accepted name for the device, which is commonly known by a number of distributors' names, such as Airboard, Cyboard, Future Foot, Hovertrax, Segway, Soar Board and Swagway.

The term "hoverboard" originates from a 1969 science fiction novel by M.K. Joseph and was popularized in the Back to the Future film franchise. Remarkably, the "original" hoverboard referred to a fictional skateboard-like device that floats above the ground.

Back to the Future Hoverboard to go up for auction: http://t.co/nOKblg7b0K pic.twitter.com/PgTy5G1Av3