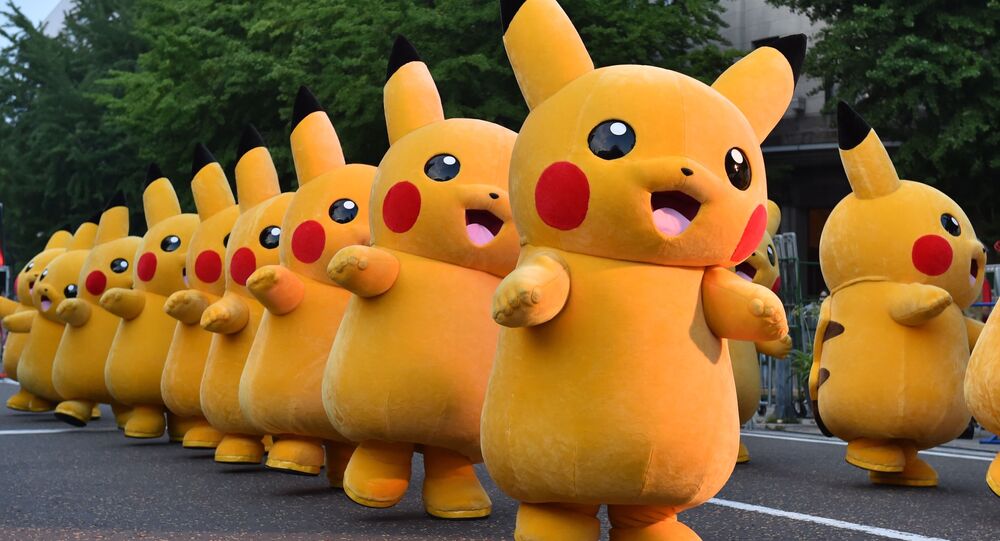 Amid espionage fears, US Pentagon employees have been issued a ban on playing the global phenomenon game, Pokemon Go, on their work phones. It follows reports that suggests the game could be used to pinpoint the locations of secure facilities.

© AFP 2021 / TIZIANA FABI
Why Work When You Can Play? Officials Around the World Go Pokemon Hunting
A viral hit and headline-grabbing media sensation, Nintendo's new mobile game is the most downloaded app in it's first week ever. It was only launched in July, but the free to play, augmented reality game already has 100 million downloads worldwide.

It's been praised for increasing the fitness of sedentary users by forcing them to walk more, and for bringing people together, as players run into each other while out hunting Pokemon.

But now, with the number of users increasing every week, serious security concerns are being raised.

It's been revealed that a July 19 memo to Pentagon staff and contractors warned that the game, which uses GPS, could be used to pinpoint secure government locations, and even for espionage recruitment.

​Unbelievably, it seems Pikachu and co. may be a US national security threat.

BEST THING THAT HAPPENED TO ME TODAY IS THAT I NOW HAVE A POKEMON IN THE PENTAGON'S GYM pic.twitter.com/ynLzANhp2A

​Pokemon Go makers Niantic Labs, have been criticized by security experts for the game seeking to access more personal data than it needs to function.

Just a week after it was launched, Niantic Labs worked with Google to fix a bug where downloading the Pokmon Go app prompted a request on Apple iPhones to access the player's Google accounts, including emails. Niantic Lab say the error has since been fixed.

But that hasn't reassured other security fears.

​There is also an Android malware problem. Because the app was only released officially in a few countries, fans have been downloading unofficial mirror apps, which can have a greater risk of malware being built in. Hackers are then able to open a backdoor into smartphones.

So, it's not just the Pentagon getting jumpy over Squirtle and Charmander.

​Last week, Iran became the first country to ban Pokemon Go over security concerns and the Israel Defence Force has also banned it's soldiers from playing the game in it's bases.

​​And it's not just national security but business secrets that some suggest are at risk. Volkswagen recently emailed around 70,000 of its employees, strictly forbidding them from having the game installed.

The car maker is worried that Pokemon Go would make them susceptible to corporate espionage because the app uses location data, phone cameras and data sharing.

Meanwhile, die-hard Pentagon employee fans can still play the game on their personal phones. Although it would proabbly be best to avoid doing so while in a meeting.

In an embarassing episode, widely shared across international media, US State Department spokesman John Kirby was prompted to chide one reporter last month, after he was caught playing the game during a press briefing.

​The Pokemon Company is expected to continue rolling out the game in more countries, meaning Pokemania doesn't look like it's going to stop any time soon. Great news for fans, perhaps less so for security experts left scrambling in its wake.