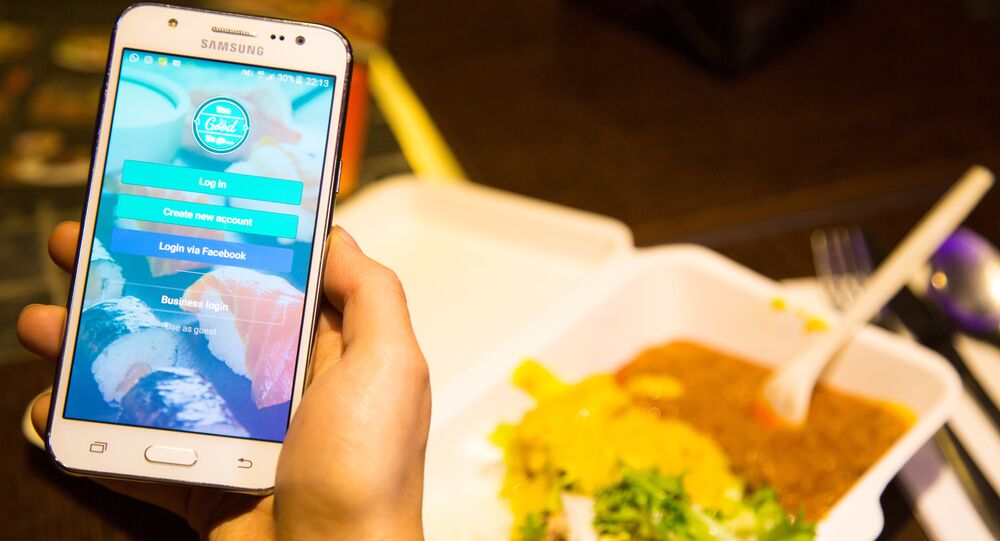 London has its fair share of crazy foodie start-ups, from cereal cafes to naked restaurants, but now it's all about putting food destined for the dump on your dinner plate instead.

A new take-away food app has been launched in the UK's capital to cut down on the amount of food that is thrown away. Too Good To Go allows customers to order food that would usually be thrown away at the end of the day at a cut-down price.

New #App hoping to revolutionise restaurants' treatment of surplus food that is Too Good To Go — Resource Magazine https://t.co/TZl6vfKkSY

​Developers, Chris Wilson and Jamie Crummie have already signed up 95 restaurants in London, previously launching the app in Brighton, Leeds, Birmingham and Manchester.

"Bakeries were the most popular food outlets at the start but that has since change to sushi restaurants," Crummie told Sputnik.

"Sushi is definitely the flavor of the month."

The idea behind the app is that food which would usually be thrown away after a certain amount of time is instead sold to Too Good To Go customers.

​​Takeaway dishes cost around US$3.70 per meal — with a portion of the money going back to the restaurant.

"We're basically the mediator between the restaurant and the consumer — the bridge," Crummie told Sputnik.

The eco-entrepreneurial firm  supplies all the packaging for their takeaway food which is recyclable and encourages their customers to walk to their chosen restaurant to pick up their meal.

Of the 95 restaurants that have signed up in London, the majority are independent eateries or small chains.

Get involved in #charityTuesday and pay forward a meal through the TGTG app. See surplus food put to good use and not binned! #tgtguk

"We really want to start having conversations with the bigger chains," Crummie said. "But we feel like we need to have a proven model behind us before they take a risk with a small time app."

Almost 50 percent of food thrown away in the UK comes from household waste.

Too many strawberries this season? Give this quick berry jam recipe a go https://t.co/fKmjwigIQ3 #save #LittleWins pic.twitter.com/PFzysPUmbm

People chuck away around seven million tonnes of food and drink each year, according to Love Food Hate Waste, which says more than half of all wasted food and drink is edible.

Too Good To Go may have its sights set high on getting big restaurant chains on board — but Crummie insists the company's feet remain firmly on the ground.

"The back bone of this whole operation is about working with communities," Crummie said.

​"We're committed to addressing food waste and making restaurant food that can be prohibitively expensive to some people, obtainable for all. It's all about inclusivity and making food more affordable."