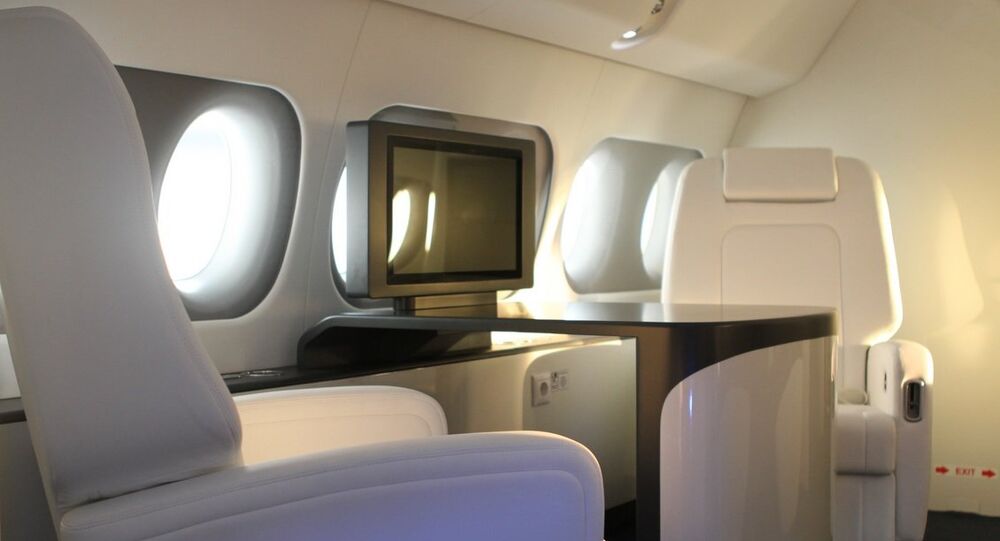 The Moscow-based Sukhoi Civil Aircraft company, the producer of the Superjet 100, has unveiled the SportJet, the world's first plane that has been tailored to the needs of professional sports teams. The jet's full-size mock-up is open to the public at Rio de Janeiro's Marimbás Club for the duration of the 2016 Olympics.

The aircraft is meant to maximize athletes' performance by helping them train, recover and rest while traveling at 30,000ft above ground.

Several clients have already expressed their interest in the new plane, Anastasia Gordeeva, who heads the Sukhoi Civil Aircraft's press office, told Sputnik. "We are currently in talks, but we will not make their names public before we reach an agreement," she said.

The SportJet's cabin is divided into four zones: a recovery zone for physiotherapy and workouts; a resting zone outfitted with smart seats with built-in gadgets to monitor biometric data; a coaching zone to analyze performance and a seating area for the administrative staff.

© Photo : Sukhoi Civil Aircraft
SportJet by Sukhoi
© Sputnik / Maksim Blinov
Russia's PAK FA Stealth Fighter Jet to Receive an 'All-Seeing Eye'
Innovative solutions have been designed exclusively for the SportJet and will not be available on other aircraft produced by Sukhoi Civil Aircraft, Gordeeva said.

The aircraft has been designed in close cooperation with experts on medicine and science in sports to avoid hypoxia, dehydration, muscle fatigue and other negative effects that professional athletes may encounter since they spend half of their season in the air, the Sukhoi Civil Aircraft said.

The SportJet, capable of carrying up to 60 people, can be customized for various disciplines, including baseball, hockey, basketball, football and soccer.

The company is convinced that the sports executives will opt for the SportJet because it is a cost-efficient solution for a brand-new market that no one has fully tapped into.

"On a cost per trip basis we outperform [other aircraft used to transport sports teams] because we are lighter, more fuel efficient and the right size for this particular task. We're not taking a market share, we are creating a market to take it over," the Institution of Mechanical Engineers (IMechE) quoted Eugene Andrachnikov, senior vice president of commerce at Sukhoi Civil Aircraft, as saying.

The Sukhoi Superjet 100: Best Plane in Its Class