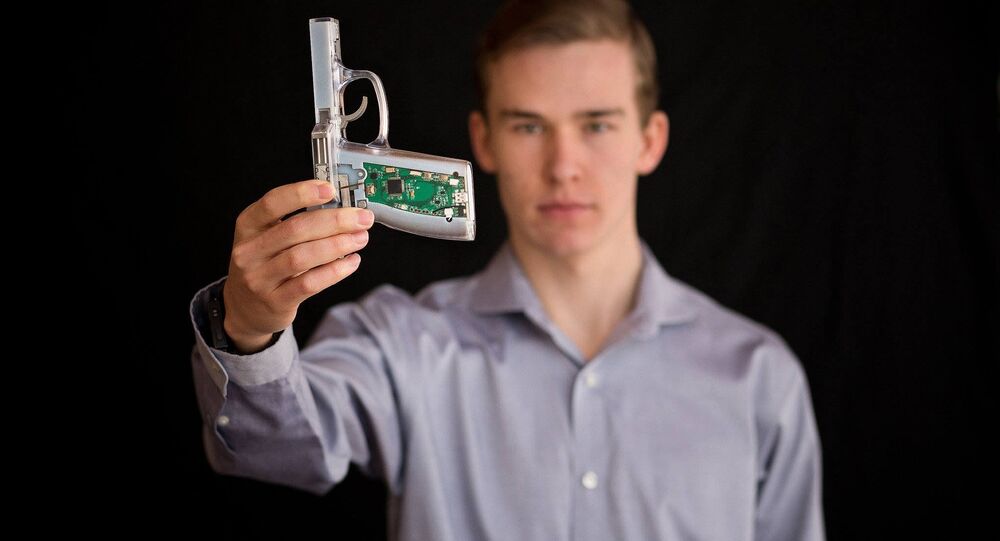 After hearing about the increase in news reports of gun violence and firearms-related crimes in his home state of Colorado, the US based teen Kai Kloepfer decided to build a 'smart gun' that would prevent accidental shootings, thefts, suicides, and wrongful use.

A key catalyst for Kloepfer was in fact the Aurora movie theatre shooting killing 12 people in 2012. He decided to pursue the idea of manufacturing a 'smart gun' as part of his school science fair project and it has since become a life quest.

An undergraduate at MIT, Kloepfer, 19 has spent considerable time and energy reaching his 'smart gun' project to prototype stages and is now pushing the next steps towards being able to fund, mass produce and then sell his concept into the wider market.

Conceptually, a SMART Gun is one that incorporates technology that would prevent it from being used by an unauthorised person. Kai's well-intended solution is designed to prevent accidental shootings, thefts, suicides, and wrongful use.

"I initially started developing non-functional prototypes using plastic bottles but over time and with the help of a small team and winning funding awards, we raised enough to move forward. We have now reached working model stages and we will have a real firearm model with the 'smart' tech implemented ready by this week," Kloepfer told Sputnik.

When the user grips the gun normally, it reads his fingerprint and compares it against a list of users that is stored inside the gun. If it matches — the gun is ready for fire. Otherwise, it remains locked and secured.

The fingerprint sensor itself employs military-grade encryption with a key unique to that firearm to ensure the highest possible degree of certainty that the owner and their designees are the only people who can use the gun.

Speaking about the next stages of the project Kai said:

"It will take another year or so for us to have the final working design for commercial stages of the project, and outside of crowd-funding, we are also entering seed-funding avenues to take the project to the next level of development."

In the midst of the broader conversation on gun violence in the US, smart guns have been touted as a solution that won't infringe on gun owners' rights but also do not need any form of political buy-in or affiliation.

The concept of guns which are safer — surely that wouldn't be met with any resistance and if not then why are they not already out there?

Kloepfer told Sputnik that beyond the design and financial challenges it has had mixed responses, predominantly positive:

"I have been met with some concerns over reliability of the technology and government mandates have led to some backlash from the gun lobby and enthusiasts but that was expected. You just can't pursue anything without some resistance."

"Many have also expressed that something like this has never been done, or they ask why something like this is not already available. That's exactly what we are committed to and if this can even save just one life, then it's certainly worth us taking it to the stages we have planned."

Kloepfer estimates it will take $7 million to $8 million to set up a manufacturing operation — a tall order for even an established gun maker and so here is where key practical challenges lie even for others seeking to enter this market. Fortune magazine reported in April that the entire US firearms industry generates about $8 billion of sales annually.

Kloepfer acknowledges that making cars safer took decades, and the fight for safer firearms will very likely too, but he is confident that his project will make the positive impact that has been intended since day one of inception.

When asked about his own personal stance on the broader debate around gun control and availability, in particularly in the US, he said:

"As a project, we are of course pragmatic about the broader debate. We are on a mission to make guns safer and that can only be a good thing for everyone."

With next stages of funding raised Kai is planning to commission a team of engineers from 'VisionWorks Engineering' in San Diego, California to advance his prototype to the stage where it will be mass-produced.

For now, the mission for Kloepfer's project continues to make ‘smart guns' available for all, and it may just be ready in time for a hopefully smarter future generation.

iFire: Handgun Disguised as Smartphone Revealed in US