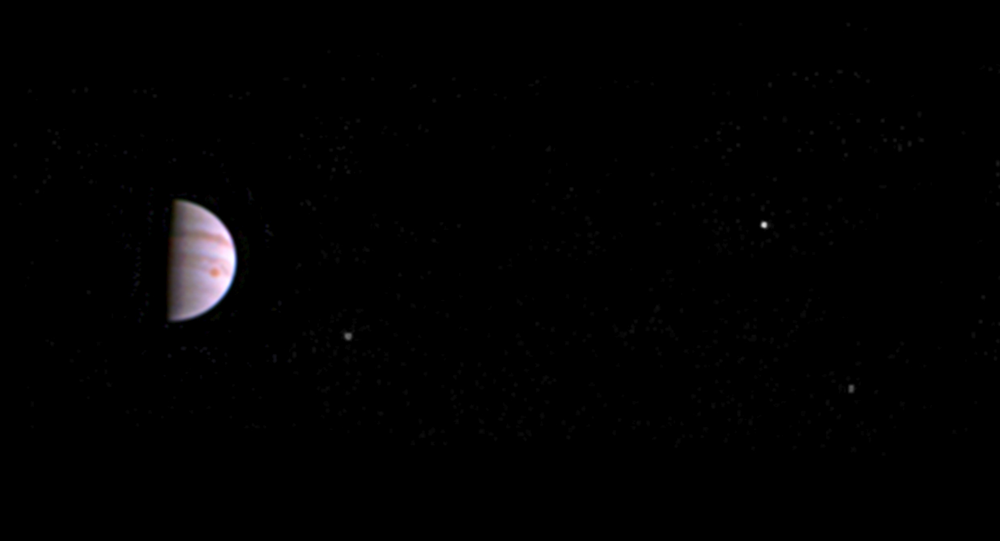 After a five-year voyage, NASA’s Juno spacecraft has captured its first photo of Jupiter and three of its moons.

As part of a mission to study Jupiter, the Juno space probe launched from Cape Canaveral in 2011. It reached its destination earlier this month, entering a polar orbit of the gas giant, and is hard at work.

NASA released the first photo snapped by the spacecraft, captured from a distance of 2.7 million miles from Jupiter. The image shows a number of the planet’s most recognizable features, including the Great Red Spot and several cloud belts.

© NASA . NASA/JPL-Caltech/SwRI/MSSS
NASA's Juno Jupiter probe captured this image on July 10, 2016, less than a week after entering orbit around the giant planet.

"This scene from JunoCam indicates it survived its first pass through Jupiter’s extreme radiation environment without any degradation and is ready to take on Jupiter," Juno principal investigator Scott Bolton said in a statement.

"We can’t wait to see the first view of Jupiter’s poles."

The probe will ultimately make 37 trips around Jupiter, recording imagery all the while.

"The first high-resolution images of the planet will be taken on Aug. 27, when Juno makes it next close pass to Jupiter."

The spacecraft’s mission will end in 2018 with a fiery plummet into the Jovian atmosphere.