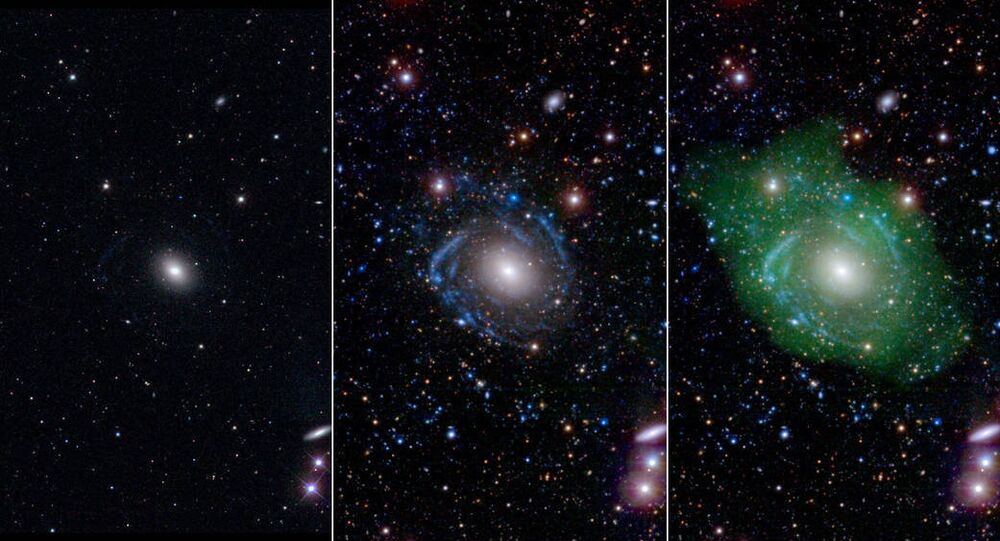 A humongous Frankenstein-like galaxy formed by "body parts" of multiple galaxies has been spotted by American scientists for the very first time.

© NASA . Swift/Aurore Simonnet, Sonoma State University
New Scientific Techniques Give Close Up of Monstrous Star Eating Galaxies
Galaxy UGC 1382, about 250 million light-years away from our planet, had so far been considered a small, old, unremarkable bunch of stars. That was until two astronomers stumbled upon it and decided to have a closer look.

Mark Seibert of the Observatories of the Carnegie Institution for Science, and Lea Hagen, a graduate student at Pennsylvania State University, wanted to conduct an ordinary observation of a typical elliptical galaxy — and they chose the boring UGC 1382.

But while checking data from NASA telescopes, including ultraviolet light images from NASA's Galaxy Evolution Explorer (GALEX), it dawned on them that was no ordinary galaxy.

First of all, the galaxy was much bigger than it had initially seemed: 718,000 light-years across,that is about seven times the width of our galaxy- the Milky Way.

"We saw spiral arms extending far outside this galaxy, which no one had noticed before, and which elliptical galaxies should not have," said Hagen, who led the study. "That put us on an expedition to find out what this galaxy is and how it formed."

© CC0
Green Galaxies Are Going Through Violent Aging, Study Finds
In fact, the real surprise was not about dimensions. As the astronomers kept observing the mammoth galaxy, they realized that its structure was topsy-turvy: usually, a galaxy's core is the part that has formed first, and therefore contains older stars.

The more one moves to the galaxy's outer regions, the younger the stars one can observe. In this case, the opposite was true.

"The center of UGC 1382 is actually younger than the spiral disk surrounding it," Seibert said.

"It's old on the outside and young on the inside. This is like finding a tree whose inner growth rings are younger than the outer rings."

This strange architecture is probably the outcome of several galaxies of different ages merging into the composite business UGC 1382 is now. That caused the galaxy to be promptly dubbed "Frankenstein." This is so far the only known case of a galaxy forming this way, although obviously the existence of other similar galactic patchworks cannot be ruled out.