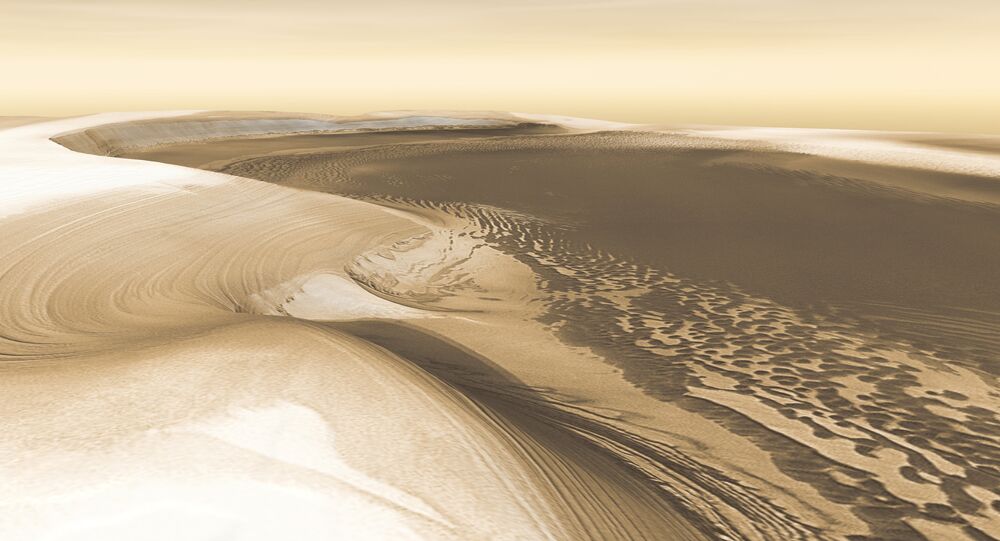 It's hard to imagine Mars as the "white planet," but 370,000 years ago that's precisely what it was.

According to new research by geologists at the Southwest Research Institute in Texas, the Red Planet appears to be coming out of an ice age that would have given the planet an icy white covering.

From studying the whirling icy caps at the planet's poles, beamed down to Earth by NASA's Mars Reconnaissance Orbiter, scientists have analyzed the evolution of Martian climates. Ice ages on Mars are driven by the same key factors as ice ages on earth, that being the changes in the orbit and tilt of the planet. This alters the amount of solar radiation the planet is exposed to, resulting in climate fluctuations.

Just like Earth, Mars experiences seasonal cycles throughout the year, and longer cycles which can trigger major changes in the planet's climate. The research currently being conducted around Mars's climate can help geologists on Earth better understand changes that could occur on our own planet in future.

By measuring how the ice caps that once covered the planet have now gathered at the Mars's poles scientists can use Mars as a laboratory of sorts to study how Earth's climate will evolve.  A postdoctoral researcher at SwRI, Dr Isaac Smith, said that "because Mars has no oceans at present, it represents a simplified 'laboratory' for understanding climate science on Earth."

Mars is the new space race for space science institutes across the world, with tech and science companies competing to develop new innovative technologies that could one say allow humankind to inhabit our small rusty neighbor.

Though today's discoveries are of more interest to those with their feet firmly on the ground, as Earth's climate change continues to be an area of great concern to those from all walks of life.

Today, in a major speech on climate & energy, @realDonaldTrump refused to address the central problem of climate change.

Beyond Ikea: Swedish Gadget to Harvest Water on Martian Surface