Nine new monster stars have been unearthed in a galaxy in the Milky Way by a team of astronomers using the Hubble Space Telescope. The so-called 'monster' stars are 30 million times brighter than the Sun and could shape future understanding of the cosmos.

The cluster named R136 is the biggest group of massive stars to have ever been discovered, raising questions about how a star’s life begins.

An international team of astronomers led by researchers from the University of Sheffield in the UK located the Tarantula Nebula in a satellite galaxy in the Milky Way.

© NASA . ESA
The Tarantula Nebula is the most luminous nebula of its type in the local Universe.

The cluster hosts nine massive, hot, luminous stars that are over 100 times more massive than the Sun. The researchers also found dozens more stars that are 50 times the mass of the Sun.

Professor Paul Crowther, from the University of Sheffield’s Department of Physics and Astronomy and lead author of the study said:

"Once again, our work demonstrates that, despite being in orbit for over 25 years, there are some areas of science for which the Hubble is still capable." 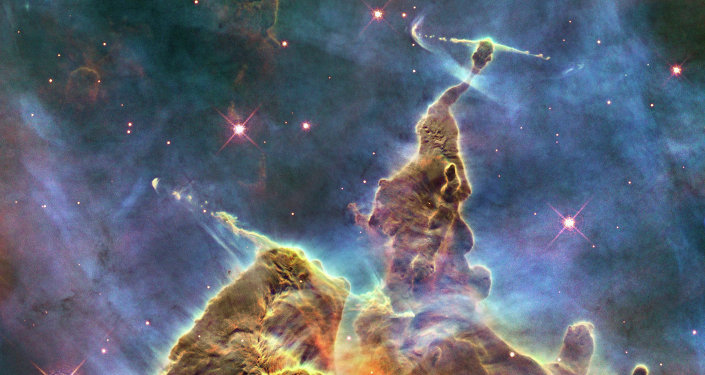 © NASA . ESA
Hubble: Looking Through the Sky Eye Discovering Top Secrets of the Universe
14
Before the discovery of the monster stars, astronomers believed that massive stars were formed when smaller stars came together, however the scale of these new start suggests that they could be formed in another way.

Saido Caballero-Nieves from the University of Sheffield and co-author of the study said that "there have been suggestions that these monsters result from the merger of less extreme stars", that orbit each other around a shared mass.

"From what we know about the frequency of massive mergers, this scenario can’t account for all the really massive stars that we see in R136, so it would appear that such stars can original from the star formation process."

Scientists also found that the monster stars rapidly ejected up to an Earth mass of material per month at a rate of one percent of the speed of light.