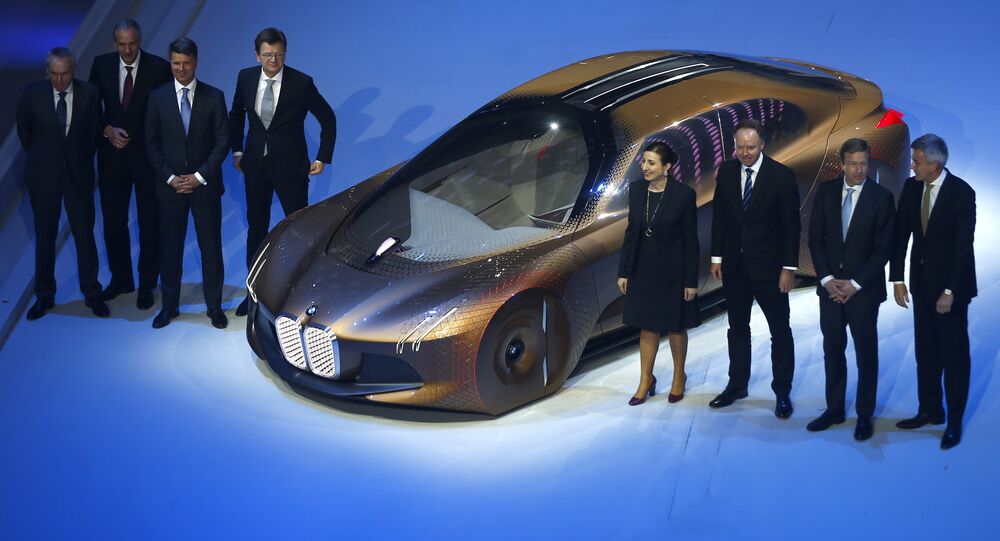 Happy Birthday to Me! BMW Builds Dream Car for Its Centenary (VIDEO)

The German carmaker is celebrating its 100th anniversary by unveiling a new concept car for the future; among its innovations is a self-driving mode which alters the car's appearance.

German carmaker BMW has revealed its concept of the car of the future, called the BMW Vision Next 100 Concept.

The car was unveiled at a special event in Munich on Monday, and is the first of four concept cars for its four brands, BMW, Mini, Rolls and motorcycles, which are being released to mark the company's centenary.

The concept car has two modes, called "Ease," an autonomous mode, and "Boost," when a person is driving it; the interior of the car changes according to which more it is being used in.

© AFP 2021 / CHRISTOF STACHE
The BMW vision car "The next 100 years" stands at a stage after a celebration show marking the 100th anniversary of BMW on March 7, 2016 in the Olympic hall in Munich, southern Germany
© AP Photo / Matthias Schrader
German car manufacturer BMW presents the 'Vision Next 100' concept car during the 100th anniversary celebrations in Munich, Germany, Monday, March 7, 2016
The Boost mode "expands the driver’s range of perception and transforms him or her into the 'Ultimate Driver' – the best driver they can possibly be," BMW says.

"The Companion mode responds to the driver's personal needs in order to create emotionally-intense experiences."

The interior also has revolutionary "skin," or "alive geometry," scales which change color to alert the driver to incidents and objects ahead. The scales are also visible from the exterior of the car in the form of movable wheelhouse covers for optimal aerodynamics, the company explained.

In addition, the "heads-up display" projects signals and directional arrows on the windscreen, within the driver's field of vision.

BMW’s head of design Adrian van Hooydonk said that the company wanted to produce a car that would capture people's imagination.

"Our objective with the BMW Vision Next 100 was to develop a future scenario that people would engage with," van Hooydonk explained.

"If, as a designer, you are able to imagine something, there’s a good chance it could one day become reality."