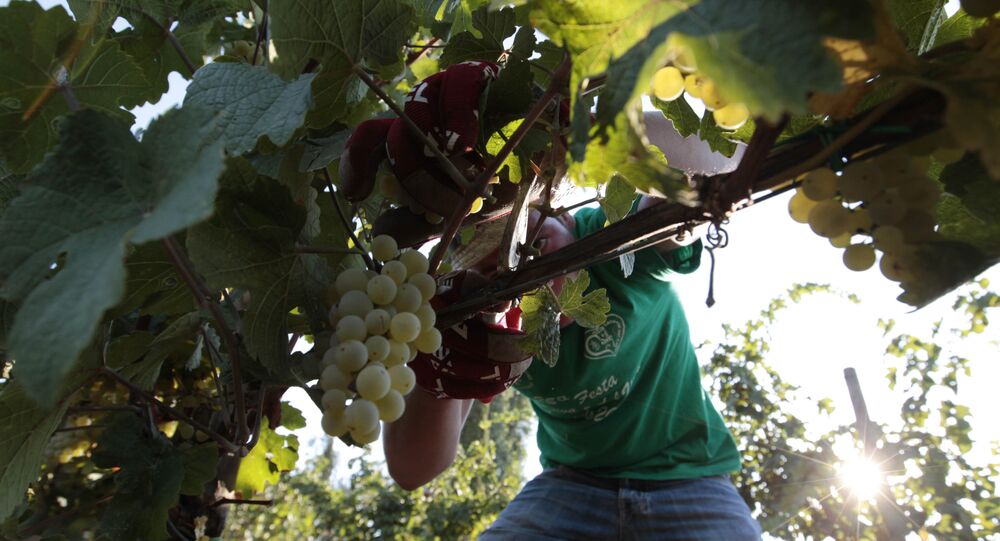 The Italian wine researchers Enosis Meraviglia are making a bold attempt to dominate the world of wine production through the introduction of the Genesis wine robot, which will be responsible for the initial stage of producing wine.

“In order to beat the world competition it is necessary to aim for exclusiveness. In order to achieve exclusivity it is essential to acquiesce to research, as only with the aid of research can we secure and value the exclusivity of tradition,” says the statement on the official website of the winery.

To do this the company decided to turn the initial stages of its wine production over to robots.

The Genesis wine robot, created by wine-maker Donato Lanati, the founder of the company’s research center, looks like it's come straight from the Star Wars set. It is a metal tank with numerous sensors and antennas attached to it.

The tank is able to store up to 200 kilograms of grapes, from which is will make 100 liters of wine for further processing.

The robot weighs the grapes, squeezes them and measures how much juice it creates. The scientists say that according to the information Genesis gives it, they can learn much about the variety of the grape and the region it comes from.

The initial raw wine produced by the robot further ferments in a so-called “psychedelic laboratory”, a sort of incubator, so-called due to the numerous colored lamps placed inside it.

The laboratory maintains the right temperature needed to process the wine and has special equipment inside which constantly gathers information on its biochemistry.

After this, the wine is aged in a special dark, chilled cellar.

Amongst the company's other creations is the Meraviglia wine-glass, a hand- made and hand blown wine cup, which is perfect for the exaltation of the olfactory sensations and to oxygenate the wine.

The shape is an original design, characterized by a circular crown known as “the ring of Saturn.” The glass was created after an attentive study of the invisible fragrances emitted by the wine.

“Some of these fragrances rise quickly within the free space of the glass, trying to escape, whilst others re-enter it. Within, these various fragrances, external ones, instead of attaching themselves to the sides of the glass, reach the edge and then they disappear. The swollen ‘ring of Saturn’ manages to carry these precious molecules towards the center of the glass, thus optimizing fully the oxygenation of the wine and withholding any eventual deposit,” the company assures.

Nice Catch! Store Employee Dives to Save a Bottle of Wine