The Russian Federal Space Agency has presented its ten-year development plan, which includes the construction of a prototype engine powered by atomic energy, able to power a spacecraft on expeditions into the far reaches of the galaxy. 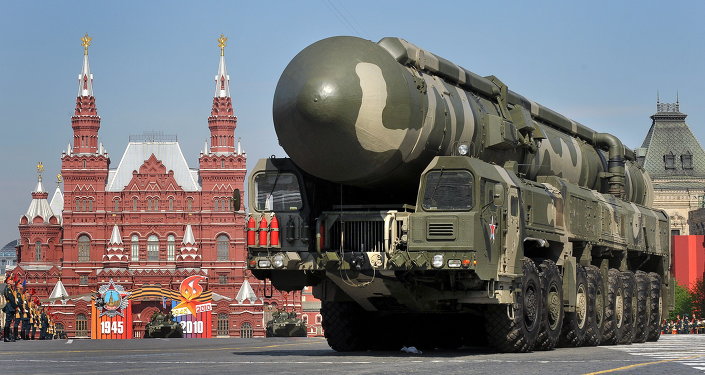 © AFP 2019 / ALEXANDER NEMENOV
Russia to Maintain Level of Nuclear Restraint for National Interests
The Russian Federal Space Agency (Roscosmos) has presented its ten-year development plan to the Russian government, which includes the construction of a prototype engine that uses a nuclear reactor to propel it on expeditions into distant space.

"All the work on the construction of the atomic engine is ongoing, in accordance with planned timescales. We can say with a large amount of certainty that the work will be completed within the provided timescale," Andrey Ivanov, a spokesman for Rosatom, Russia's State Atomic Energy Corporation, told Izvestiya.

The project is part of the 2016-2025 Federal Space Program, which Roscosmos has recently presented to the Russian government for approval.

Andrey Ionin of Russia's Tsiolkovskiy Cosmonautical Academy told Izvestiya that the program envisions a wider plan for space exploration, which will guide the direction of the engine's construction.

"It is clear that an atomic engine is necessary only for exploration of distant space," said Ionin.

"Projects like the creation of an atomic engine have to take place in the context of a larger project, in order to precisely understand what exactly we are making such a powerful energy source for."

© Sputnik / Sergey Mamontov
Employees of S.P. Korolyov Rocket and Space Corporation Energia, at work
On Monday, Rosatom revealed that some aspects of the engine's construction are already underway.

"Two important stages of the project have recently been carried out," said Ivanov.

"Testing of the reactor's casing has been successfully completed. This testing subjected the casing to excessive pressure and took 3D measurements of the metal, welding and conical intersection."

In addition, "A unique fuel element has been constructed which allows the engine to work in high temperatures, in large temperature gradients, and high doses of radiation," said Ivanov.

NASA/Don Davis
Apocalypse Not Now: Nuclear Warheads Could Save Earth From Asteroids
Currently, space probes such as NASA's Voyager and Pioneer spacecraft use Radioisotope Thermoelectric Generators (RTG) to convert heat from radioactive plutonium-238 into useful electricity.

These atomic batteries have been used since the 1960s to power long-term, unmanned, space missions to the dark, distant reaches of the solar system, or to the night side of planets where solar cells are not practical. When it was launched in 1977 Voyager 1's three RTG's produced about 470 watts of electric power, with the power output degrading over time.