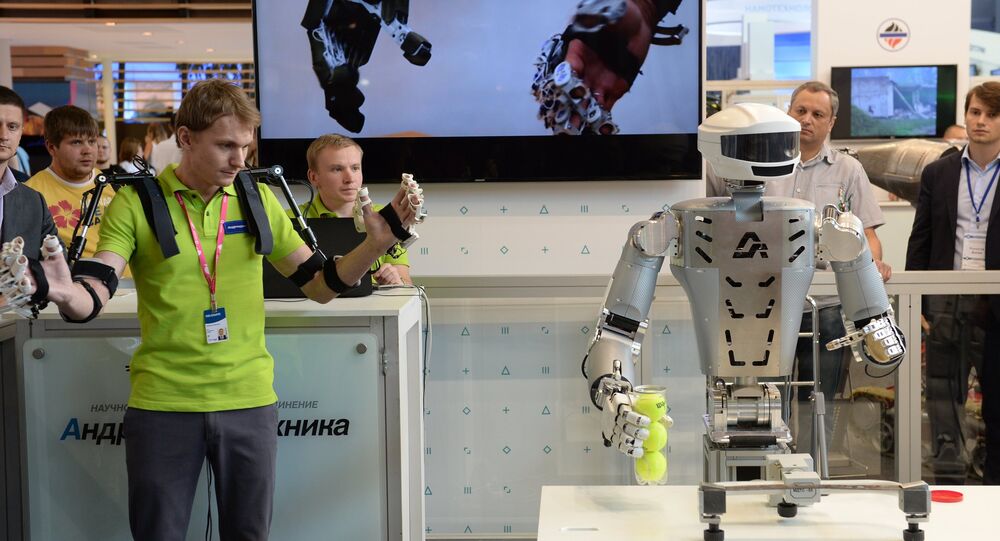 Android Technics Director-General Alexander Permyakov said that the robot that will replace humans on dangerous missions in space will have a "combined control system that will allow it to completely replace humans in circumstances that are potentially hazardous or harmful."

© Photo : Youtube/Rokossovskiy Konstantin
Russian Military Robot Prototypes to Hit Production by Next Year
MOSCOW (Sputnik) — Russian scientists from the state-run Android Technics firm are working on an "avatar robot" that will replace humans on dangerous missions, such as during the exploration of the moon or Mars, the head of the company said Tuesday.

The Anthropomorphic Robotic System is under development by the Android Technics Scientific Production Association in cooperation with Machine-building Research Institute TsNIIMash.

The robot will have a "combined control system that will allow it to completely replace humans in circumstances that are potentially hazardous or harmful," Android Technics Director-General Alexander Permyakov told RIA Novosti.

© Photo : Youtube/Rokossovskiy Konstantin
Universal Soldiers: Combat Robots to Join Russian Army in 2016
"This is relevant, in particular, for exploring Mars and the moon where robots will be able to set up [research] stations, build premises and external infrastructure, assemble electric generators and other surface constructions without a direct human presence," Permyakov continued.

He said anthropomorphic robotic systems of this kind would increase the efficiency of space missions and cut the cost of sending astronauts into space, while also reducing risks to their health and life.