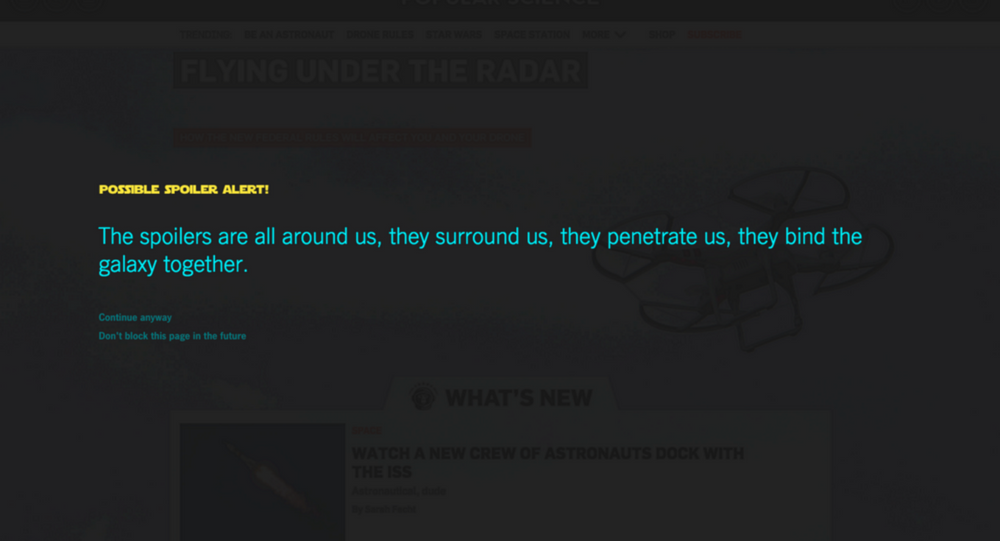 With “Star Wars: the Force Awakens” hitting theaters this weekend, a big concern for any true fan is accidentally stumbling across some spoiler-laden review or think piece. For the wary fan unwilling to completely avoid the Internet for the next few days, Google has you covered.

At no risk of hyperbole, the seventh installment in the Star Wars franchise may well be the cinematic event of the decade. Opening December 18, the movie is projected to break all box office records based primarily on an unprecedented pre-sale of over $50 million.

If you haven’t already gotten a ticket for the opening, you may be out of luck, left out in the cold like a shivering tauntaun on the ice world of Hoth. Until you manage to secure a theater seat, the Internet will be a very dangerous place filled with fanboy (and girl) complaints and the inevitable comparisons to the prequels.

Now, Google has developed the perfect solution to keep you safe in the interim.

Force Block is a downloadable extension for Chrome. If a user clicks on a website that contains any mention of Star Wars, the browser will display a warning screen.

"Possible Spoiler Alert," it reads. The message then mimics the stilted language of the movie’s Jedi knights by stating that, "The spoilers are strong with this web page."

​The user is given the option of continuing, and if you really want to confront the Darth Vader inside yourself within that tree on Dagobah, and despite the repeated cautionary warnings from Yoda, you continue at your own peril.

​Google isn’t the only search engine offering Internet protection from spoilers. Programs like Spoiler Shield and FB Purity are also available. These, however, only screen social media feeds, and if you’re Facebook friends with a Force Awakens whistleblower, you may need to reconsider that relationship.