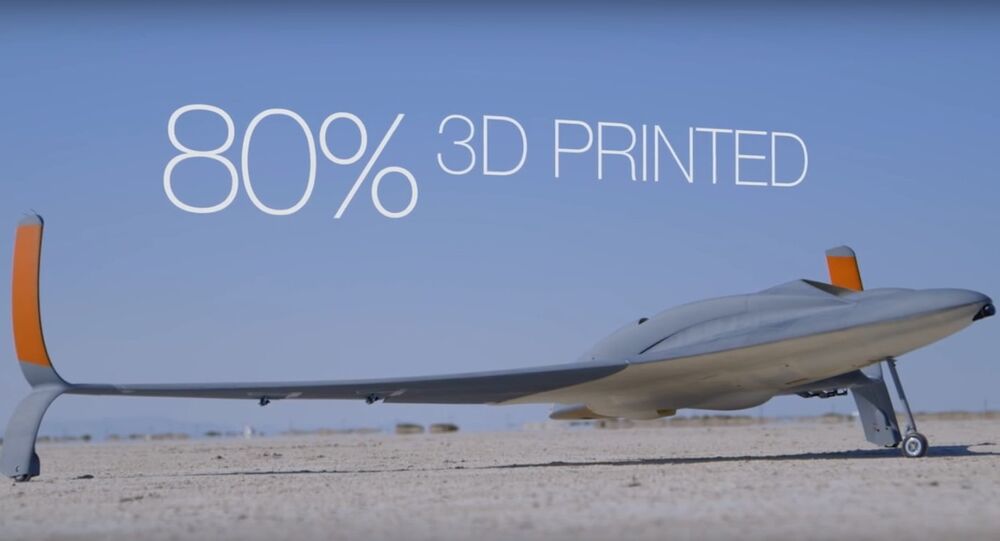 © Sputnik / Alexei Danichev
Futuristic Novelty: Russia Prints UAV Using 3D Printer
The companies claim the new drone is the biggest and most complex of all 3D-printed vehicles ever created. The UAV, with a wingspan of nine feet and weighing only 33 pounds, is incredibly strong and powerful – it can reach speeds up to 150 mph.

Moreover, the UAV was produced in a “dramatically shortened timeline” compared to that of “traditional” drones.

“A primary goal for us was to show the aerospace industry just how quickly you can go from designing to building to flying a 3D printed jet-powered aircraft,” Dan Campbell, Aerospace Research Engineer at Aurora Flight Sciences said in a video presentation of the UAV. “Overall, the technology saw us cut the design and build time of the aircraft by 50%.”

Above all, details comprised of ULTEM meet the flame, smoke, and toxicity requirements set by the US Federal Aviation Administration. That is why this material is acknowledged to be the ideal for airplane components — it has optimal thermal, mechanical and chemical features, constructors noted.

“[U]sing different 3D printing materials and technologies together on one aircraft to maximize the benefits of additive manufacturing and 3D print both lightweight and capable structural components,”Sevcik said.

“Whether by air, water or on land, lightweight vehicles use less fuel. This enables companies to lower operational costs, as well as reduce environmental impact. In addition, using only the exact material needed for production is expected to reduce acquisition cost by eliminating waste and reducing scrap and recycling costs,” Sevick concluded.

The new UAV will be presented to the public at the Dubai International Airshow, which will take place November 8-12.