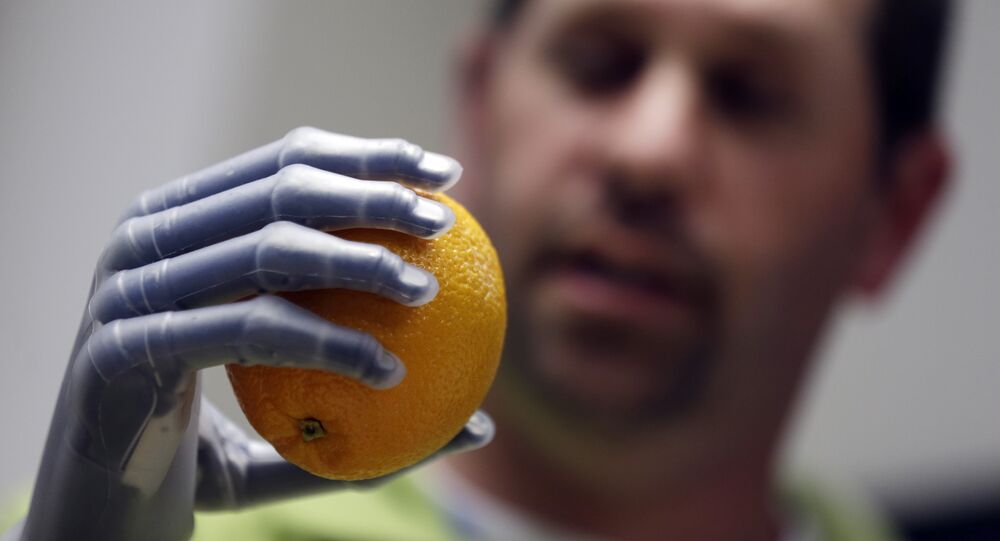 The breakthrough offers the hope that people with prostheses will, in the future, be able to have feeling in their artificial limbs.

Wow! Science Gives Us ‘E-Skin’ That Changes Colors Like a Chameleon
Scientists have created plastic skin that can detect pressure, and deliver the resulting sensory signal to the brain, Stanford University announced on Thursday, a breakthrough which holds the promise that people with prosthetic limbs will one day be able to feel with their prosthesis.

Professor Zhenan Bao of Stanford's Chemical Engineering Department, who led the research, explained that her team's ultimate aim is to create a flexible electronic fabric embedded with sensors that could cover a prosthetic limb and replicate some of the sensory functions of real skin.

"This is the first time a flexible, skin-like material has been able to detect pressure and also transmit a signal to a component of the nervous system," said Bao.

The scientists were able to fit sensors which can detect a variety of pressures, from a light finger tap to a firm handshake, just like human skin.

"This work represents a step toward the design and use of large-area organic electronic skins with neural-integrated touch feedback for replacement limbs," write the scientists in their paper, published in the journal Science on Thursday and entitled 'A skin-inspired organic digital mechanoreceptor.'

Pressure, the target of the current study, is just one of six types of biological sensing mechanisms in the human hand. The scientists hope that further research will enable them to develop different sensors for the plastic skin that can replicate, for example, the ability to differentiate materials, or hot and cold temperatures.

This plastic, skin-like material for prosthetics can detect pressure and send signal directly to a brain cell: http://t.co/k1JkhABQeS

"We have a lot of work to [do before we can] take this from experimental to practical applications," said Bao. "But after spending many years in this work, I now see a clear path where we can take our artificial skin."