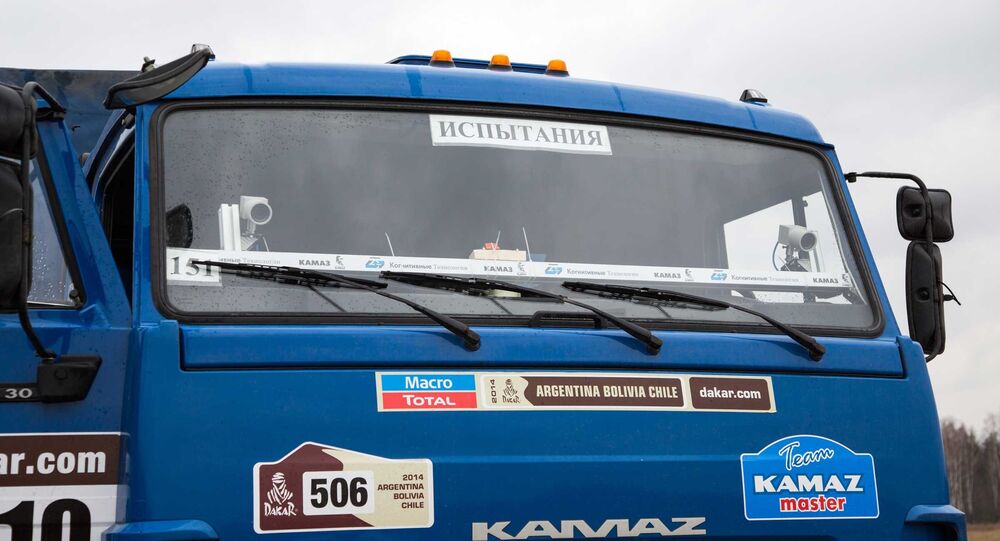 In a roundtable held at Moscow's National University of Science & Technology (MIS&S) on Friday, reps from the team working on Kamaz's new driverless truck brought us up to date on the latest from their ongoing development effort. Sputnik's got the exclusives, including new photo and video, of some of the equipment being used in the testing.

The new technologically advanced truck began its development as a cooperative project between legendary Russian truck manufacturer Kamaz, IT company Cognitive Technologies, and MIS&S back in February.

Speaking at the roundtable, a Kamaz company representative explained that since the beginning of the year, "the driverless Kamaz has already passed two phases of testing on proving grounds in Tatarstan and the Moscow region. The vehicle is capable of independently performing basic maneuvers (turning, turning around, moving in a snake pattern, etc.) of stopping before various obstacles and of moving in an organized column. The truck is also capable of distinguishing people and of making sharp turns," the company rep noted.

According to developers, the Kamaz driverless truck is the only vehicle in its class in the world capable of moving in conditions of poor visibility, including fog, snowfall and heavy rain.

"Today, our trucks can move in the autopilot regimes at a speed up to 60 kilometers per hour. This is adequate for urban driving. After a few years they will be able to move safely unattended on roads without human drivers at speeds of between 80 and 90 kilometers per hour," the Kamaz representative explained.

"But the main advantage of our truck consists of the fact that unlike its foreign counterparts, our truck is capable of driving on roads with poor marking, and with no markings at all," the rep added.

KAMAZ
One of the Kamaz trucks used to test the new unmanned truck's sensor equipment.

Now, engineers are said to be working on raising the effectiveness of the truck's autopilot regimes at higher speeds.

MIS&S is involved in this project developing software for the truck's active safety systems, based on stereo optical technology allowing the vehicle to 'see' and analyze the road environment. Additionally, the university has carried out testing and adaptation of radar equipment.

Cognitive Technologies' task is to create the artificial intelligence systems which will allow the driverless Kamaz to analyze traffic situation and to independently control the vehicle.

Development of the new truck is expected to be completed by 2020. Kamaz has indicated that the first of its unmanned trucks may hit the road on Kamaz's grounds as early as next year.

Commenting on the vehicle's potential, the company's rep noted that "we have already received a great deal of interest, as wells pre-orders for the truck from the agricultural, mining, oil and gas industries –that is, those industries where vehicles are not traveling on public roads."

The Ministry of Education and Science took an active interest in the project from its beginnings, allocating 300 million rubles (about $4.6 million US) worth of funding, with Kamaz promising to provide another 90 million ($1.4 million).

Among Russian car and truck companies, Kamaz seems to have taken the lead in development of a driverless vehicle. Closed course testing of the equipment mounted on a modified Kamaz-5350 General Utility truck has been underway since earlier this year, with the company recently announcing that road testing will begin in the near future, most likely in and around Naberezhnye Chelny, in the Republic of Tatarstan, the company's home.