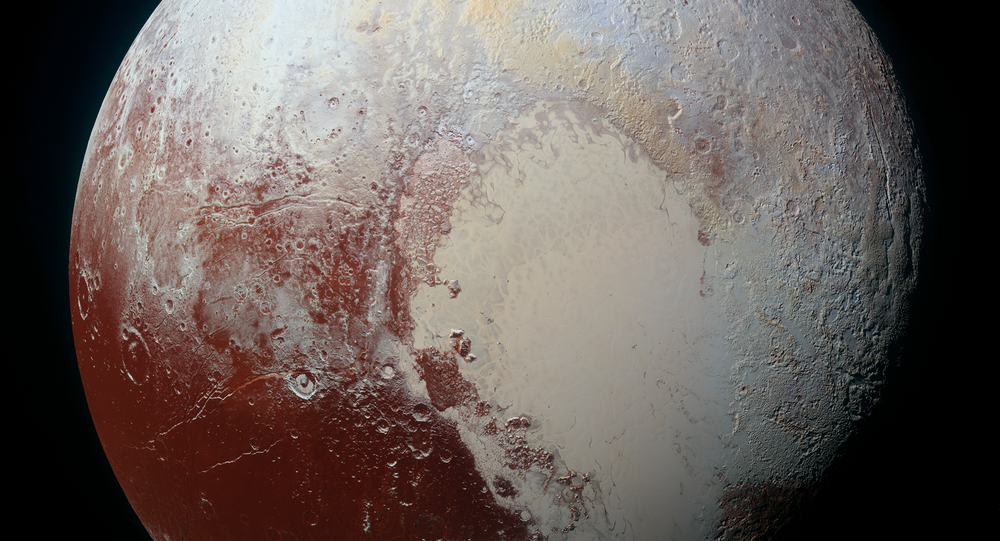 NASA has revealed its latest photos the New Horizons flyby of Pluto. Using false color, the images show that the dwarf planet’s geography is much more complex – and bizarre – than previously thought.

While the photos were taken in July, NASA has only now downloaded and properly rendered the images, and they detail a Pluto we’ve never quite seen before.

That’s because they’re taken with New Horizons Multispectral Visual Imaging Camera. Capturing wavelengths not visible to the human eye, the MVIC can capture never-before-seen details, and it’s already expanding our knowledge of an extraterrestrial body nearly 8 billion kilometers from Earth.

"Many landforms have their own distinct colors, telling a complex geological and climatological story that scientists have only just begun to decode," NASA wrote on its website.

"The image resolves details and colors on scales as small 0.8 miles."

One strange feature which scientists can’t fully account for is a stretch of "snakeskin" mountains.

© NASA . NASA/JHUAPL/SWRI
Rounded and bizarrely textured mountains, informally named the Tartarus Dorsa, rise up along Pluto’s day-night terminator and show intricate but puzzling patterns of blue-gray ridges and reddish material in between.

"It’s a unique and perplexing landscape stretching over hundreds of miles," project scientist William McKinnon said in a statement.

Another bizarre landmark is small range of mountains which have sprouted in the middle of the frozen plains of Sputnik Planum.

© NASA . NASA/JHUAPL/SWRI
This image reveals features as small as 270 yards (250 meters) across, from craters to faulted mountain blocks, to the textured surface of the vast basin informally called Sputnik Planum.
© NASA . NASA/JHUAPL/SWRI
Zooming in on the right section of the above photo shows the textured surface of the plain surrounding two isolated ice mountains.
Then there are the methane readings. New Horizons’ readings show that that Pluto has ample amounts of methane, but that its distribution seems erratic. While crater rims show high traces, the insides of those impact spots appear to be empty.

"It’s like the classic chicken-or-egg problem," New Horizons scientist Will Grundy said in a statement. "We’re unsure why this is so, but the cool thing is that New Horizons has the ability to make exquisite compositional maps across the surface of Pluto, and that’ll be crucial to resolving how enigmatic Pluto works."

© NASA . NASA/JHUAPL/SWRI
On the left, a map of methane ice abundance shows striking regional differences, with stronger methane absorption indicated by the brighter purple colors here, and lower abundances shown in black. Data have only been received so far for the left half of Pluto’s disk. At right, the methane map is merged with higher-resolution images from the spacecraft’s Long Range Reconnaissance Imager

Launched in 2006, the spacecraft traveled for 9 years before it reached Pluto, and is currently moving through the outer reaches of the solar system.